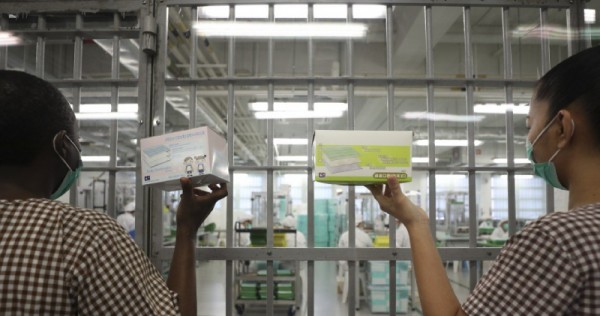 “It looks like one I made,” the other will reply with a laugh.

Angel*, from the Philippines, and Tina*, from Uganda, are among 28 prisoners who volunteered in February to work the overnight shift and increase the production of masks needed for the Covid-19 pandemic .

“If there is something you can do to help, even in a little way, why not? It is so rewarding to see people wearing the coloured face masks we made,” Angel, 39, said in an interview with the Post.

She has been serving an 11-year sentence at Lo Wu Correctional Institution since 2012 after being convicted of drug trafficking. She was arrested in 2011 while on transit to Vietnam.

Due to be released in two years, Angel said she would have been “long gone” if she had been arrested in Vietnam, where drug trafficking carries the death penalty.

Explaining why she volunteered to work the graveyard shift, she said: “Hong Kong gave me a second chance. Why not give back to the city that helped me and saved me from what I could have faced?”

The women’s medium-security prison has been making surgical masks since 2007, and was producing about 1.1 million per month for various government departments before the Covid-19 outbreak hit Hong Kong in January.

The green surgical masks for adults are stamped with “CSI” for Correctional Services Industries.

That meant running three shifts daily, from 8am to 4pm, 4pm to midnight and overnight.

Aside from about 100 inmates working the daytime and overnight shifts, more than 1,200 off-duty and retired prison officers also joined the team, working from 4pm to midnight.

That boosted output to 4 million masks per month, including around 1.1 million children’s ones supplied to schools and about 700,000 for cleansing workers.

For Angel and Tina, working overnight meant turning their daily schedule upside down.

They used to wake at around 6.15am for breakfast, before working from 9am to 4pm, with an hour-long lunch break. Dinner was around 5pm, and they usually turned in at 10pm.

Before switching to masks, Angel worked in leather production, and Tina made garments.

Since February, they have had breakfast at 8am after completing their overnight shift.

They sleep until 3.30pm, wake up for lunch, exercise, and have dinner at around 7pm. They sometimes nap before starting work at midnight.

The night-shift workers were moved to special rooms where their sleep would not be disturbed by daytime noise.

Tina, a 45-year-old mother of four, thought the switch would be hard, but took to her new routine without difficulty.

“The motivation comes from knowing that what I am doing is very rewarding. I feel proud. I’ve even seen the chief executive wear our mask,” said Tina, who is serving a seven-year sentence for drug trafficking and will be released in two months.

She and Angel said they did not feel tired working through the night as they are served special snacks and drinks, and the piped music includes Michael Jackson’s Beat It and Hong Kong singer Alan Tam Wing-lun’s Friend.

“I feel good because I believe the masks we have been making contributed towards bringing Covid-19 under control in Hong Kong,” she said.

Tina and Angel said they were worried about the situation back in their home countries, where their family members faced a shortage of masks.

“They asked if I could send them masks because masks are expensive. They envy me,” Tina said.

She hoped to put her mask-making skills to good use when she returned to Uganda.

Angel was taken aback to hear that the price of masks had skyrocketed in the Philippines, but said she believed in karma.

“Even though I cannot reach my family, I know someone out there will look after them,” she said.

“I am praying that very soon, all these things will be behind us and we all move forward.”

*Names have been changed to protect the inmates’ identities