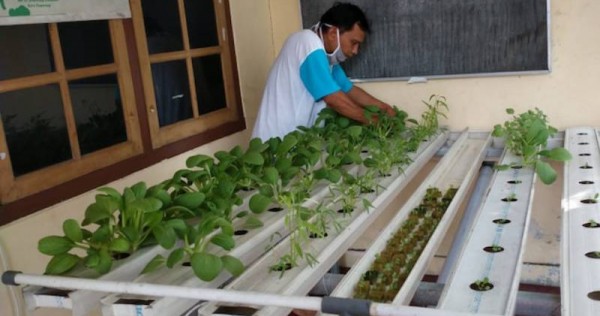 Central Java, home to more than 30 million people, has chosen a different approach to handle the Covid-19 outbreak rather than imposing large-scale social restrictions (PSBB) like many other regions across Indonesia.

Instead, it has come up with its own strategy dubbed Jogo Tonggo (neighbours looking after each other), a community movement program in which people collaborate to ensure people maintain physical distance, manage food supplies and help others in response to the pandemic.

Residents of community unit RW 5 of Jomblang sub district in Candisari, Semarang, are among the Central Java communities that have been implementing Jogo Tonggo in the past few months.

More than three-quarters of RW 5’s residents work in the informal sector, mostly as day labourers and street vendors. Since the coronavirus pandemic hit the province, 393 of the 539 families in RW 5 have been financially impacted, according to Mohamad Qunut, a Jogo Tonggo facilitator in RW 5.

To help these families, neighbours built a hydroponic garden and started a collective lumbung pangan (food barn) at the RW 5 office.

“We had no idea a resident had been planting hydroponic crops for a while, not until another resident came to me saying that he could probably assist and encourage others to do the same,” Qunut told The Jakarta Post on Saturday.

The community has regularly received lettuce, eggplant and pepper seeds after communicating its plans to the province’s food agency and has also been breeding catfish.

The residents also initiated a drawing and colouring program to keep their children entertained during the pandemic.

“We encourage communities to embody their local values. They do not have to be alike and share the same

He said his administration was now working to cut the time it took to receive test results, from 10 days to two days, to allow hospitals to better manage their patients and prioritize treatment for Covid-19 patients.

“Those most vulnerable will get priority, which we hope will lower the fatality rate,” Ganjar said.

Epidemiologist Riris Andono Ahmad from Gadjah Mada University said the effectiveness of Covid-19 social interventions did not largely depend on the nature of the approaches – whether they be voluntary like Jogo Tonggo or more mandatory like the PSBB.

He said the results would vary between regions depending on the characteristics of the society, meaning efforts in certain provinces might yield different outcomes than if the same measures were implemented in Central Java, and vice versa.

“What is important is whether it can motivate people to maintain distance between each other,” he said. “As long as the efforts are adjusted to local contexts, they could be effective. But society is a very dynamic system and sometimes things work but, at different times, they don’t. A periodic evaluation is highly needed.”