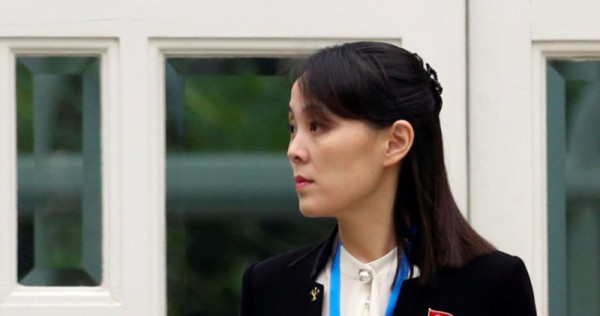 In totalitarian North Korea, there is no higher authority than supreme leader Kim Jong-un.

But when Pyongyang last week cut all communication with South Korea during the latest escalation of tensions between the neighbours, state media reports made no reference by name to the 36-year-old leader.

Determined to make the “betrayers and riff-raff” in the South pay for allowing North Korean defector activists to fly propaganda leaflets across the militarised border, the younger Kim and veteran hardliner Kim Yong-chol ordered the communications cease, the Korean Central News Agency reported on Tuesday.

A few days before, she had issued a statement warning Seoul would be “forced to pay a dear price” if it continued to allow “evil conduct by rubbish-like mongrel dogs”.

On Thursday, South Korean President Moon Jae-in’s administration acceded to her demands, announcing it would crack down on the leaflet campaigns out of concern for their impact on “efforts to achieve peace and prosperity on the Korean peninsula”.

Moon, who held three summits with Kim Jong-un in 2018, has struggled to make progress on inter-Korean reconciliation, waylaid by the lack of concrete steps taken by Pyongyang toward denuclearisation and US pressure to maintain sanctions against the regime.

Despite the concession from Seoul, Kim ramped up tensions further on Saturday with the release of a statement in which she said the military had been instructed to “decisively carry out the next action”.

Although Kim did not elaborate, the statement hinted at the destruction of the Joint Liaison Office, the de facto embassy for managing inter-Korean relations located in the North Korean border city of Kaesong.

After years appearing silently at her brother’s side, Kim Yo-jong’s involvement in the recent course of inter-Korean relations demonstrates her growing influence within Pyongyang’s opaque leadership, analysts said.

“I believe they used this as an opportunity to give her prominence as a policymaker in the party, beyond just being Kim Jong-un’s sister or one of his accompanying officials when he makes public visits,” said Rachel Minyoung Lee, a former North Korea open source analyst with the US government.

“State media described her as being in charge of inter-Korean affairs and giving orders.

“This was a deliberate move not only to inform the world that she is in charge of inter-Korean affairs, but to further elevate her role in the party.”

Kim is believed to be in her early 30s and has worked behind the scenes in the North’s propaganda organisations. She has long been regarded as one of her brother’s closest confidantes, often seen tending to her sibling with an ashtray or pen on hand during his public outings.

During a thaw in inter-Korean relations, she led a delegation to the 2018 Winter Olympics in Pyeongchang, South Korea, where she became a subject of fascination for local and international media due to her understated style and waif-like appearance.

But in recent months, Kim, whose official title is first vice department director of the Central Committee of the Workers’ Party of Korea, has emerged as a high-profile political figure in her own right.

In March, Kim issued her first statement lambasting the South. She followed that with a message directed at US President Donald Trump before her latest threats to sever communications with Seoul and destroy their Joint Liaison Office.

“She has been taking on a more substantive public role particularly with regard to national security and inter-Korean issues during the last year,” said Michael Madden, an expert on the North Korean leadership at the Stimson Centre in Washington.

“The recent statement and state media report is a manifestation of that.”

Analysts said Kim’s combative approach may be calculated to pressure Moon to split from the US and relax sanctions linked to the North’s nuclear weapons and missile programmes, or to distract from the country’s economic difficulties due to the coronavirus pandemic.

On Friday, the second anniversary of Trump’s landmark first summit with Kim Jong-un , Foreign Minister Ri Son-gwon said there was no benefit in maintaining the relationship between the two leaders .

“Although North Korea has pushed the US to make concessions in nuclear negotiations, the US has not shown any positive signals,” said Lim Jae-cheon, a professor of North Korean studies at Korea University.

“The North is turning to South Korea, which has been very friendly to it. In addition, I assume an internal reason: North Korea’s economic conditions have worsened since the Covid-19 pandemic.”

Despite the North’s staunchly patriarchal norms, Kim’s rising status has fuelled theories she could be next in line to take power due to her brother’s lack of a male heir of suitable age.

The older Kim’s health has been a regular target of scrutiny: he is overweight, a heavy smoker and was unsighted in state media for several weeks in April, prompting speculation he had died or was at least gravely ill.

“If something bad happens to Kim Jong-un within 10 years, there is no doubt that Kim Yo-jong will be a key factor in determining the direction of North Korean change until Kim Jong-un’s son becomes an adult,” Lim said.

“It is not certain whether she herself can be the leader of the North but we need to leave open the possibility that she could be leader.”

Lee, the former US government analyst, said it may simply be the case that Kim Jong-un respects his sister’s abilities.

“It is too early to tell what Kim Jong-un’s intentions are in publicly promoting his sister this way,” Lee said.

“He may be boosting his sister’s profile not necessarily with the purpose of grooming her as his successor but because he truly believes in giving her leadership opportunities, or because Kim Yo-jong convinced him to give her opportunities.

“They are young. They may be more forward-leaning about gender and leadership issues.”