Where is Sri Lanka’s president and why are people in his pool and bed? 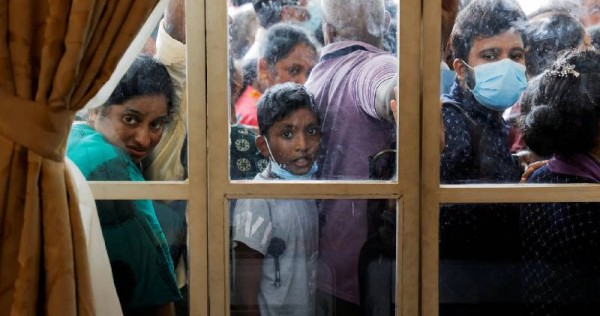 Most Sri Lankans are clear on what they think of President Gotabaya Rajapaksa, blamed by so many for mismanaging the economic crisis that has brought the nation to its knees and blighted the lives of millions through food, fuel and medicine shortages.

However, his whereabouts have been far less transparent since hordes of desperate protesters, some of them on the streets for weeks, swarmed government buildings in Colombo, including his official home, on Saturday (July 9), then refused to leave.

The BBC on Wednesday reported that he fled the country on a military jet, arriving in the capital of Maldives, Male, at 3am local time (3pm Singapore time). His brother, the former finance minister Basil Rajapaksa, has also left the country and is headed for the US, the BBC said.

Rajapaksa announced on Saturday, in a message conveyed through parliament speaker Mahinda Yapa Abeywardena, that he would resign on July 13. The speaker said a new president would be voted in by lawmakers on July 20. Prime Minister Ranil Wickremesinghe also expressed his willingness to step down.

Their decision came after thousands flocked to the capital, determined to oust the government amid unbearable living costs. Police fired tear gas and some journalists were said to have been assaulted by elite police officers. Late on Saturday night, the prime minister’s house was set ablaze.

Protesters on Tuesday continued to occupy official buildings. Video footage has shown them swimming in the president’s pool, sleeping on his bed and playing the piano, while the prime minister’s residence is now a community kitchen.

Some are sceptical that the announced resignations will go ahead. Kasumi Ranasinghe Arachchige, involved in the protests since they began in late March, said people are waiting to see what happens next.

“They have changed their plans last minute before,” she said. If the resignations do happen “it’s a small victory” but if “manipulation or corruption” remain, protests will continue, she added.

About a year ago, Sri Lanka began its dive into a foreign currency crisis as its reserves dwindled. As it became a middle income country, it lost access to concessionary loans from development agencies (granted on more generous terms than market loans), and became increasingly dependent on International Sovereign Bonds (ISB), sourced from the market. These have higher interest rates and no ‘grace’ repayment periods.

By 2020, more than half of the country’s debt was from the commercial sector. As lower taxes and Covid-related factors reduced tourism revenue and consequently shrunk the economy, the Central Bank of Sri Lanka began tapping into foreign reserves to repay ISB loans, while initially refusing to negotiate an International Monetary Fund (IMF) bailout package .

By 2022, the nation’s external debt was over US$30 billion (S$42.2 billion), and earlier this month Wickremesinghe said the country is bankrupt.

Excessive money printing resulted in the further depreciation of the rupee and soaring inflation. By June Sri Lanka’s food inflation was 80.1 per cent.

To promote organic agriculture, the government banned chemical fertiliser, resulting in a 40 to 50 per cent drop in food production during the harvesting season.

By March, Sri Lanka was in the grip of a huge crisis as essential food items, including milk powder, became scarce, and amid daily power cuts due to fuel shortages. Small protests began around the country while a women’s protest against the rising cost of living took place near the president’s private residence in a Colombo suburb.

By the end of March, the country was experiencing 13-hour power cuts and an anti-government protest near Rajapaksa’s house on March 31 turned violent when the police clashed with protesters.

Protests continued despite a state of emergency and a 36-hour curfew being declared and micro protests mushroomed, converging into a movement popularly referred to as “GotaGoGama” (blending the main slogan used by protesters with gama, which means village in Sinhalese), with a tented “town” in the capital complete with toilets, phone charging points, a community kitchen, and even a library.

The protesters were soon calling for the resignation of then Prime Minister Mahinda Rajapaksa, the president’s brother. On May 9, violence broke out around the country as his supporters clashed with peaceful protesters, leading to his resignation.

The cabinet was dissolved, in line with the constitution. Around eight people died during clashes, over 200 were injured, and 38 houses were torched, including some belonging to politicians. Wickremesinghe became the new prime minister, but protesters have accused him of doing political deals with the Rajapaksas.

On Monday the Central Bank of Sri Lanka said prolonged political instability may delay IMF negotiations and the ability to address shortages.

If Wickremesinghe does go ahead and step down, it would be the sixth time the veteran politician leaves his post midterm, while Rajapaksa would be the first president to step down.

Any interim government would need a detailed agenda with the prior agreement of all parties, said Sri Lanka lawyer and political analyst Javid Yusuf. This programme should outline the political and economic reforms, with agreed timelines for implementation.

“Economic reforms are critical because that impacts the daily lives of the people. Also, the name for the next leader will emerge once this programme is set up, based on who is best suited for its implementation. Unless there is a programme of this nature, there can be a lot of dissension within the government, as this will be an all-party government,” he said.

He noted that when the political and economic situation stabilises, the country should have a general election within months to find a “long-term solution…. where the people give a fresh mandate to the government”.

Analysts have frequently said that the president and his enhanced powers, granted by the 20th amendment to the constitution and including the ability to dissolve parliament after half a term, is partly to blame for the economic crisis, with “too much power to one person and one office”.

Yusuf said the new government should abolish the amendment and revert to the 19th amendment instead, “then abolish the executive presidency” within around three months.

Bhavani Fonseka, a senior researcher at Sri Lanka’s Centre for Policy Alternatives, said the president and prime minister must resign if there is to be political stability, with delays meaning they could “resort to potentially questionable moves to continue to hold on to power”.

Even if Wickremesinghe becomes acting president, Fonseka said it is “very unlikely” he will remain for long as his party has just one seat and he “does not have any support”.

“If the president resigns but the prime minister decides to remain, this is going to lead to another crisis because the people are very clear in their demands. They don’t want to see the present status quo remain.”