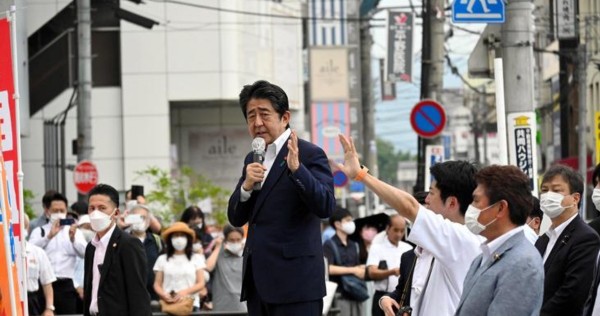 Former Japanese prime minister Shinzo Abe’s assassination , at the hands of a loner with grievances over his mother’s religious donations, has brought to light the South Korean-founded Unification Church’s steady ties with Japanese conservative politicians.

The church has been heavily relying on donations from Japanese followers for its income and Japanese conservative politicians have been acting like “billboards” in expanding its influence in the country, a long-time observer said.

In an exclusive interview with This Week in Asia, South Korean observer Reverend Steven Tahk Ji-woong, of the Anglican Church in Japan, also said he was concerned that hate incidents – words and possibly physical attacks – against Koreans living in Japan could increase following the killing.

Tokyo Korean School, which one of Tahk’s children attends, has put its students on guard, urging them to refrain from unnecessary outings and be careful with words and acts.

Immediately after Abe’s death, South Korea’s consulate in the Japanese city of Fukuoka posted a Twitter alert telling Koreans to be on guard against possible hate crimes. However, it quickly removed the notice following online protests from Japanese who complained the office was viewing them as potential criminals, according to the Chosun Ilbo in Seoul.

The Japan branch of the Unification Church, also known as the Family Federation for World Peace and Unification, confirmed on Monday (July 11) that the mother of the suspect in Abe’s killing was a member.

The church’s Japanese head, Tomihiro Tanaka, declined to comment on her alleged donations.

Neither Abe nor the suspected killer were members, Tanaka said. Nor was Abe an adviser to the church, he said in a press conference.

Tetsuya Yamagami, an unemployed 41-year-old, has been identified by police as the man who approached Abe and opened fire during a campaign speech on Friday.

Yamagami believed Abe had promoted a religious group to which his mother made a “huge donation”, Kyodo news agency has said, citing investigative sources.

The suspect told police his mother subsequently went bankrupt, the Yomiuri newspaper and other media have reported.

Founded in South Korea in 1954 by Sun-myung Moon, a self-declared messiah and strident anti-communist, the Unification Church started evangelising in Japan in 1959 after missionary Choi Sang-ik smuggled himself into the country.

The church urges people “to transcend race and religion, rebuilding the family as the vessel of true lasting love”, according to its website. It claims 600,000 followers in Japan, twice as many as Korean members.

Globally, it is said to have 10 million members in 194 countries, although critics say that number is vastly exaggerated.

Observers attribute the church’s success in Japan to the country’s traditional ancestor worship, which provided a fertile ground for aggressive evangelism touching on potential converts’ concern over their dead ancestors’ welfare as well as their own earthly prosperity.

“Japan’s cultural and religious traditions, focused on praying for dead ancestors’ welfare and their blessings for offspring, turned out to be fertile soil for the church that mixes religion and commercialism,” Reverend Tahk told This Week in Asia .

The church has been making millions of dollars every year in Japan, selling products like rosaries, Buddha figurines and ginseng juice that purportedly lead wandering spirits to heaven.

Followers are also urged to make special donations for the dead, even by taking out loans, allegations denied by a church spokesman in Seoul.

“How could you force followers to make donations? These are all vicious allegations made by former members who have severed ties with the church and now want their past donations back. They are also being instigated by outside forces to speak ill of the church,” the spokesman said.

Suspect Yamagami’s mother first joined the church around 1998 but stopped attendance between 2009 and 2017, Tanaka said.

About two to three years ago she re-established communication with church members and in the last six months or so has been attending church events about once a month, he said.

Tanaka said the church learned of the mother’s financial difficulties only after talking to those close to her. He said he did not know what caused those difficulties.

The church spokesman in Seoul said: “It’s far-fetched to link the former prime minister’s message to his killing, which was committed by a deranged loner. If news media zoom in on a certain church, it would represent a distortion of facts.”

Relations between the church and Japanese conservative politicians reportedly go back decades, with Japanese media publishing a list in 1999 of 128 politicians allegedly having ties with the organisation and its anti-communist movement.

Nobusuke Kishi, Abe’s maternal grandfather and a former prime minister, reportedly visited the Unification Church in 1970 and started building ties with the International Federation for Victory Over Communism, a group created in 1968 at Moon’s behest, according to the Christian newspaper NoCut News in Seoul.

The church has gained global media attention for its mass weddings, involving thousands of couples at a time.

The church’s affiliates include daily newspapers in South Korea, Japan and the United States, among them the conservative Washington Times , which Moon founded in 1982. The church has a business empire and various schools under its wings.

After Moon’s death in 2012, there was a severe family feud over who should succeed him, pitting Moon’s wife Han Hak-ja against her own sons.

“It has subsequently split up and its influence here and abroad has been on the skids,” said Pastor Park.

Where is Sri Lanka’s president and why are people in his pool and bed?

What is the Covid-19 BA.5 variant and why is it reinfecting so many people?