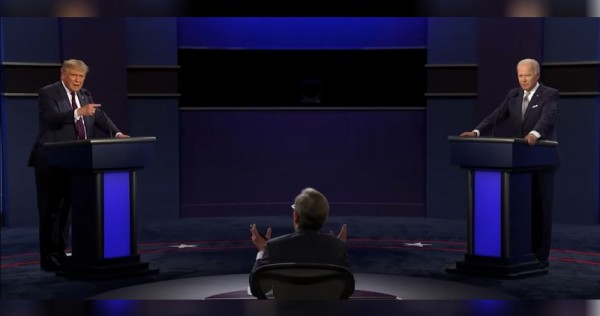 The first US presidential debate of 2020 between President Donald Trump and challenger Joe Biden was so chaotic that Taiwan’s Yahoo News anchor Catherine Lu thought there was a technical bug with her earpiece.

“I have not often come across this kind of situation!” she exclaimed live on air while presenting in Mandarin.

“Trump keeps interrupting Biden, and Biden also interrupts Trump. So [they and the moderator] are speaking simultaneously. It is hard to make out what anyone‘s viewpoint is.”

Speaking to This Week in Asia , she said that for a few seconds she “couldn’t recognise words, just voices all intertwined together”.

“I really wanted Biden to finish the whole sentences! I don’t have strong political preferences, but I wished this could be at least somewhat presidential.”

However, Lu considers Trump’s interruptions to have been part of his campaign’s game plan. “He successfully demolished Biden’s game plan, [by taking] the game down with him.”

In Asian countries where the debate was shown live with simultaneous translation, audiences and interpreters alike were left astonished, bewildered and stressed.

The translators quickly found themselves speaking and shouting over each other, mirroring the debaters, as Trump hectored Biden and the challenger reacted with exasperation – all while moderator Chris Wallace of Fox News repeatedly appealed to the president to let his opponent speak.

The politicians lobbed accusations at each other on issues ranging from economic policy, race, and the Supreme Court, in addition to exchanging personal insults in a session that American commentators described as “chaos” and “the worst debate in history”.

Tony Tsou – part of a two-man team interpreting for the live broadcast of Taiwan’s CTI news station, who has interpreted Trump for all key engagements since and including the 2016 presidential debates – said he found Wednesday’s session more challenging because of the constant interruptions.

“It was much worse than before,” he said. “Personally, I think Biden did a better job in terms of the substance of what he said. Trump, on the other hand, came off as more energetic. He also came off as kind of like a schoolyard bully, but I don’t think his supporters are going to mind.”

In Japan, where the debate was aired on national broadcaster NHK, clips of the exchanges and the translators’ struggles were posted on Twitter.

One message in Japanese read “We feel very sorry for decent Americans”, while another said: “Whatever those translators are paid, they deserve more.”

People in Japan who watched it on NHK (our public broadcaster) had to watch three men shout over each other while three interpreters interpreted over each other simultaneously soooo yes but not really?🤔 pic.twitter.com/1gItayw55f https://t.co/vWV8Top38J

Much as in the US, opinions on who fared better seemed to diverge according to political beliefs, while there was also a sense of astonishment and discomfort at the spectacle.

“Parts of it were entertaining, but I would say that I was more shocked at just how unpresidential the debate became,” said Hiromi Murakami, a professor of political science at the Tokyo campus of Temple University.

“I thought that Biden was trying to get across to the public what he wanted to do if he wins the election, but he kept getting cut off,” she said. “Debating Trump has to be a difficult task, but I think [Biden] managed to get across what he wanted, even though he had limited opportunities.”

The confrontation “showed the true characters” of the two men, Murakami said, including the moment when Biden reached the end of his tether with his opponent and told him to “shut up”.

“But at the end, I was still left wondering what kind of America either of them want in the future,” she said. “I still have no idea what they want, the policies they are planning and where the US is going.”

Makoto Watanabe, a professor of communications at Hokkaido Bunkyo University, said the overwhelming reaction from his colleagues was that the debate simply showed how “unfortunate” America had become to have two poor choices for the nation’s next leader.

“I thought it was pretty symbolic of how polarised American politics has become in the last decade or so, with the two leaders and their respective camps having no dialogue at all between them,” he said.

Yoichi Shimada, a professor of international relations at Fukui Prefectural University and a firm supporter of Trump and the Republican Party, said Trump “did very well” and “showed his energy and vitality”, though he was disappointed in the substance of the debate – particularly its lack of discussion on international affairs.

“Trump’s approach to everything is to be aggressive,” he said. “But I also think he scored some points when he made funny comments and I enjoyed it very much – although at this point I do not think that he will be able to win the election.”

Meanwhile a poll in Vietnam.. pic.twitter.com/Bx56tqzRfK

In Vietnam, interpreters on duty during the live broadcast skipped several talking points from both participants as they struggled to keep up with the flurry of rebuttals and interjections.

But on Facebook, which has more than 60 million users in a country with a population of 100 million, love for Trump flowed uninterrupted.

In the comments of a post on the Vietnamese-language “People who love Donald J. Trump” Facebook page, which has 290,000 followers, some users accused moderator Wallace of Fox News of favouring Biden and interrupting Trump.

The Facebook page of a state television channel also saw an outpouring of support for Trump’s re-election.

“I hope Mr. Trump gets elected to destroy China because China is imperious towards other countries but no president has protested against [China] like Mr. Trump,” wrote a Facebook user by the name of Cuong Van.

On VnExpress, one of Vietnam’s most-read online newspapers, a poll asking its readers about the next US president had 80 per cent of respondents favouring Trump versus 20 per cent who wanted Biden to win.