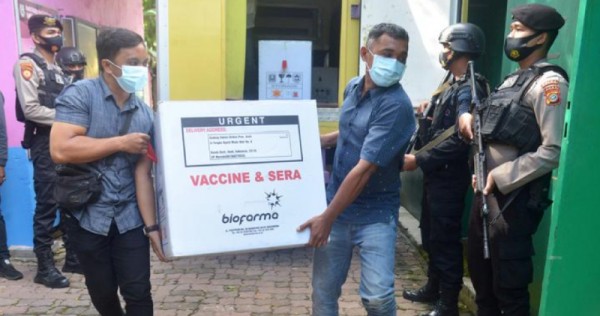 JAKARTA – Indonesian doctors have suffered one of the world’s highest death rates from the coronavirus, but that has not stopped some from voicing concerns over the vaccination campaign.

Nearly 1.5 million health workers are first in line to be immunised in the world’s fourth most populous country after it became the first outside China to start mass vaccinations with Chinese company Sinovac Biotech’s CoronaVac.

The vaccine was 50.4 per cent effective in a Brazilian trial, researchers said on Tuesday. Indonesia approved it for emergency use based on interim data showing 65.3 per cent efficacy. Turkish researchers provided an interim figure of 91.25 per cent.

Sinovac did not respond immediately to a request for comment.

Bambang Heriyanto, corporate secretary of Bio Farma, the Indonesian company involved in the trials, said the Brazilian data still topped the World Health Organisation’s benchmark of 50 per cent, however.

The Indonesian Medical Association, which says at least 259 Indonesian doctors died of Covid-19 by Saturday, is also encouraging use of the vaccine in the country of 270 million.

“We could reduce the high number of deaths among doctors and medical workers,” said its head, Daeng M. Faqih.

Indonesian doctors’ deaths amount to more than a third of India’s 736 such fatalities, but India has more than five times as many people, with six times as many virus deaths as the 24,434 recorded in Indonesia from 846,765 infections.

Dominicus Husada, a pediatrician in East Java, told Reuters he was ready for vaccination but added, “There are a few aspects that have not been answered, like how long immunity lasts and how it lessens over time.”

Doctors wanted more information to assuage concerns, said Tri Maharani, another East Java doctor, who has already had Covid-19 and so will not get the vaccine.

Dicky Budiman, an epidemiologist at Australia’s Griffith University, added, “If there is doubt among health professionals, this means there are root issues.”

These may include a strategy that is not optimal, or information supplied by the government that is not enough for professionals, particularly regarding benefits and risks, he added.

Siti Nadia Tarmizi, a senior health ministry official, said there would be no sanctions for doctors who refused vaccination, but urged medical workers not to be wary.

Most nurses are ready for vaccination, said Harif Fadhillah, who heads the Indonesian Nurses Association.

Scepticism over vaccines is an additional challenge for Indonesia in its plan to inoculate more than 180 million people living across thousands of islands over the next 15 months.

A December poll showed just 37 per cent of Indonesians were willing to be vaccinated while 40 per cent would consider it and 17 per cent refuse.

Sinovac is Indonesia’s biggest vaccine supplier, but it has also secured doses from AstraZeneca and some from Pfizer and its partner BioNTech, which has shown efficacy of more than 95 per cent.

To try to spur participation in the campaign, President Joko Widodo got the Sinovac vaccine on Wednesday.

But Agnes Christie Supangkat, a doctor in Jakarta, the capital, said she was not convinced and would not be getting vaccinated.

“It seems it is being rushed to suppress the pandemic, but only a few trials have been done,” she said.