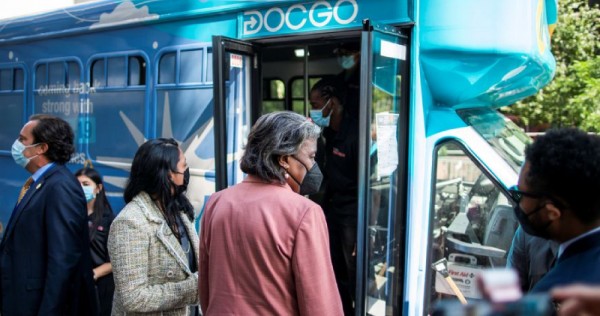 UNITED NATIONS – In a new take on vaccine diplomacy, a free mobile Covid-19 testing and vaccination station is welcoming world leaders and delegates at this week’s (Sept 20) UN General Assembly seeking to avoid a super-spreader event.

After a virtual meeting last year, about a third of the 193 UN states are planning to again send videos, but presidents, prime ministers and foreign ministers for the remainder are due to travel to the United States.

New York City has parked a pink, yellow and blue bus that serves as a mobile clinic outside the UN venue and is offering free tests and Johnson & Johnson (JNJ) vaccines to attendees all week from 7am to 11pm.

US Ambassador to the United Nations Linda Thomas-Greenfield got tested on Monday and urged those attending the General Assembly to get a free test or vaccination.

Attendees should do “everything possible to mitigate against getting covid so that this event does not become a super-spreader event,” Thomas-Greenfield told reporters.

The United States tried to dissuade leaders from coming to New York as a Covid-19 precaution although President Joe Biden will participate in person, his first UN visit since taking office.

The UN requires participants to wear masks and be vaccinated. But it relies on an honor system that means anyone entering the assembly hall effectively declares they are vaccinated. They do not have to show proof.

The first world leader to speak at the General Assembly, Brazilian President Jair Bolsonaro, will flout the vaccination rule on Tuesday. A vaccine skeptic, he has said he does not need the shot because he had Covid-19.

On Sunday, Bolsonaro and members of his cabinet ate pizza on the street because New York City has ordered restaurants to require proof of vaccination for patrons to dine indoors.

Members of the Brazilian delegation gathered at the van on Monday to get tests, which Brazil requires for entry.