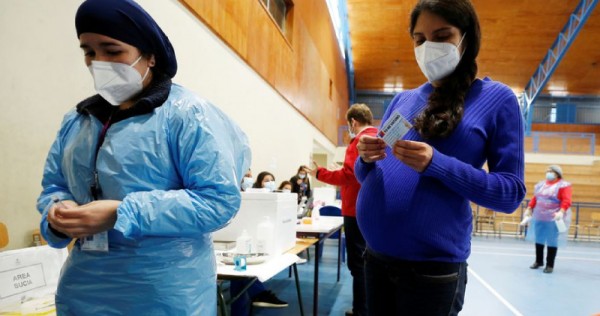 The following is a summary of some recent studies on Covid-19. They include research that warrants further study to corroborate the findings and that has yet to be certified by peer review.

Covid-19 vaccination during pregnancy appears to lower newborns’ risk of coronavirus infection, according to a study conducted in Norway.

Overall, covid infections were rare in the babies. But the risk of a positive Covid-19 PCR test during the first four months of life was 71 per cent lower during the Delta era and 33 per cent lower when Omicron was dominant for babies whose mothers got vaccinated during pregnancy compared with infants born to unvaccinated mothers, the researchers reported on Wednesday in JAMA Internal Medicine.

“There could still be a protective effect from antibodies past the first four months, but there are likely individual differences,” said Dr Ellen Oen Carlsen of the Norwegian Institute of Public Health. Babies get another type of antibodies from breast milk, she noted, and the findings could partly be due to antibodies acquired from breastfeeding, or because vaccinated mothers are less likely to get Covid-19 and infect their babies.

The risk of developing long covid after infection with the coronavirus is lower for vaccinated people than for the unvaccinated, but not by much, according to a large study from the U.S. Department of Veterans Affairs.

Researchers compared outcomes among nearly 34,000 people who had breakthrough SARS-CoV-2 infections after receipt of vaccines from Johnson & Johnson, Pfizer/BioNTech or Moderna, and more than 113,000 unvaccinated people who were infected.

The study, conducted when the Delta variant was predominant and published in Nature Medicine, found vaccination reduced the likelihood of long covid after infection by only about 15 per cent. There was no difference in type or severity of long covid symptoms between vaccinated and unvaccinated patients.

The researchers also compared hospitalized patients with breakthrough covid to hospitalized patients with seasonal influenza. “Breakthrough SARS-CoV-2 was associated with a higher risk of death… than flu,” study leader Dr Ziyad Al-Aly of the VA St. Louis Health Care System said in a tweet. “The findings indicate that reliance on vaccines as our sole line of defense is not an optimal strategy,” he told Reuters.

Impact of coronavirus variants is location-dependent

A new approach to viewing viral evolution could help predict whether and when a new coronavirus variant is likely to outcompete currently dominant versions, researchers say.

“Mutations alone cannot answer the question” of whether a variant will take hold, said Venky Soundararajan of Massachusetts-based data analysis company inference. To estimate a variant’s potential impact, the “distinctiveness” of its mutated gene sequences relative to previously circulating variants must be considered in the context of each geographical area, Soundararajan said.

Genetic changes that confer distinctiveness in one geographical region might not do so in another region, depending on what variants had circulated there, his team said in a report posted on Thursday (June 2) on medRxiv ahead of peer review.

Studying a database of nearly 8 million SARS-CoV-2 samples from around the world, the researchers tracked and compared the evolving genetic sequences of the variants to which populations in different regions have been exposed – so-called herd exposure.

The distinctiveness of a lineage in a given country during a specific time window was significantly linked to its change in prevalence in that country over the next eight weeks, they found.

The researchers are working with the US National Institutes of Health on a system that will alert public health officials when new variants arise to which communities are likely to be vulnerable.

Those are variants that have the most differences both from the original version of the virus on which current Covid-19 vaccines are based and from variants to which local residents have acquired some immunity via herd exposure.