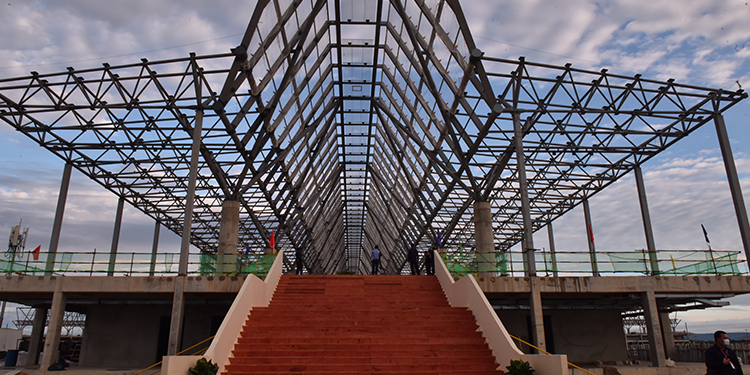 The construction of the new Siem Reap-Angkor International Airport is now 28 percent completed and behind schedule but the firm is committed to meeting its deadline, according to the State Secretariat of Civil Aviation.

The firm has faced challenges in the construction process during the pandemic such as prices of materials, price hikes of transportation, and limitations of travel of experts in charge of construction, said Sinn Chan Sereyvutha, the SSCA’s under-secretary of state and spokesman.

“As of April this year, the progress of the Siem Reap-Angkor International Airport construction was more than 28 percent completed and the firm is working to accelerate the process of construction to complete the project as planned,” Vutha said on Wednesday.

Ground breaking took place in March 2020 and the airport is scheduled to be completed in March 2023.

The firm is now in the stage of building a runway and other facilities are being constructed including roads, airport parking routes and landing systems.

“After construction is completed in March 2023, it will take a few months before reaching the trial flight stage at the airport,” Vutha said.

With a terminal area spanning more than 80,000sqm, the airport – which will be built on a 750ha site in Sotr Nikum district east of Siem Reap town – will be able to accommodate about seven million passengers annually.

The firm said the remaining land area of 1,000 hectares is earmarked for a special economic zone or industrial zone to be built near the airport as well as an expressway directly connecting the airport to Siem Reap city itself.

It is being built under the 55-year build-operate-transfer (BOT) scheme.

The airport is licensed and financed by AIAI, an affiliate of China’s Yunnan Investment Holdings Ltd, with a registered capital investment of $880 million.

The move was made as Cambodia has opened up fully and allows vaccinated tourists to visit the Kingdom.

Strict measures on Covid-19 preventions have been lifted.

In the first three months this year, Cambodia received a total of 151,680 foreign visitors in the first quarter of 2022, an increase of 114 percent from 70,901 arrivals recorded in the same period last year.