US presidential election: Trump may have lost, but Trumpism has only just begun 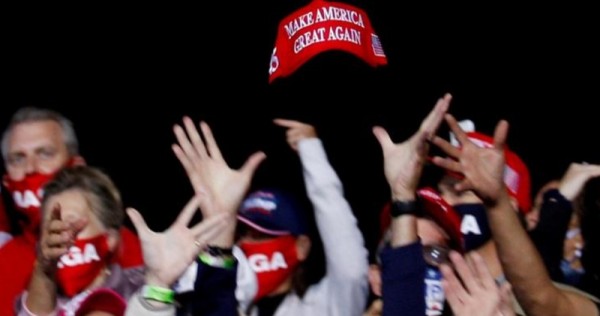 “Even if Donald Trump loses, Trumpism will live on.”

This idea ran through several commentaries that imagined a victory for the Democratic Party’s candidate Joe Biden before the November 3 US presidential election that pitted the former vice-president against incumbent iconoclast Donald Trump.

With Biden’s election as America’s 46th president now confirmed – thereby consigning Trump to a one-term presidency – the full meaning of “Trumpism will live on” is beginning to sink in.

Biden is poised to take over having won the most votes ever cast for a US presidential candidate; but the results also show that Trump expanded his support in rural areas and is likely to save his party’s senate majority in the process.

Trumpism, the pseudo-doctrine comprising a heady mix of boorishness, economic nationalism, majoritarianism – and, according to many critics, racism and a flirtation with authoritarianism – continues to have many admirers.

The latest results showed Trump had gained well over 70 million votes, or 48 per cent of all ballots cast – despite some sections of the liberal punditry predicting a “blue wave” owing to the administration’s woeful handling of the Covid-19 pandemic.

As the Financial Times’ political commentator Edward Luce put it in a pre-election piece, the ingredients that led to the rise of Trumpism in the United State sare not going any away time soon: Domestic hyper partisanship, blue-collar despair, the rise of China (the “China threat”), and middle-class insecurity.

Biden on Saturday signalled he was well aware of these hurdles. Writing on Twitter minutes after his victory was projected by leading media outlets including The New York Times and the Associated Press, the 77-year-old said he would be a “President for all Americans — whether you voted for me or not”.

Earlier, in a televised address before the result was called, he urged citizens to set aside their “anger” and “demonisation”. “It’s time for us to come together as a nation and heal,” Biden said in his home city of Wilmington, Delaware accompanied by his running mate, Senator Kamala Harris.

But having not fully repudiated the political force he had battled over the past two years, what lay ahead for Biden was “immense pressure” and the possibility that he would be “stymied at every step” in his policies, political scientist and Eurasia Group founder Ian Bremmer said.

“We are looking at what is possibly the most divided industrialised nation,” Bremmer said.

Trumpism’s influence is most likely to manifest in the actions of the Republican congressional and senate caucuses.

Daniel Sneider, a scholar of US foreign policy in Asia at Stanford University, said “the ongoing strength of the Trumpist movement will mainly be felt within the Republican Party itself where there will be reluctance on the part of lawmakers to oppose Trump because of his command of his core base”.

Analysts halfway across the globe were also fully cognisant of this political reality.

Thitinan Pongsudhirak, a political scientist and foreign policy scholar with Thailand’s Chulalongkorn University, said if Biden was earnest about healing partisan rifts with an eye on boosting his party’s chances ahead of 2022’s midterm elections, “he will have no choice but to retain some of the Trump initiatives and programmes”.

So what impact would this lingering influence of Trumpism have on Asia in the era of a Biden presidency?

Interviews with US political analysts, Asia-focused scholars and diplomats suggested the clearest sign of Trump’s continued sway after January 20 would be seen in trade policy.

Asia’s trading economies such as Japan and Singapore – and American free-trade proponents – have held out hope that if Biden won, he would quickly bring the US back to the negotiation table to revive the Trans-Pacific Partnership trade pact that Trump abandoned within weeks of taking office.

Frank Lavin, the US ambassador to Singapore from 2001 to 2005, told This Week in Asia on election night that “the single biggest question mark” over Biden’s trade policy was his stance on the TPP.

He said Biden had “parentage” of the pact given it was the brainchild of his old boss, the former president Barack Obama.

From the get go, Elms said, Biden would face trouble getting trade officials confirmed by the senate, likely to be controlled by Trump ally Mitch McConnell.

He would also face hitches with the congressional mandated powers known as the trade promotion authority (TPA). The mechanism – which allows the sitting administration to send trade deals to Congress for straight up-or-down votes without amendments – will require renewal at the end of June.

If Biden were to have a multilateral trade deal on his agenda, he must tell Congress as early as the second quarter of 2021.

The McConnell-led senate is not likely to approve this for Biden. Indeed, it will probably give the new administration very little space to play with in the legislative space, with Elms predicting the passing of all but two major packages in 2021 before it becomes “increasingly difficult to get anything done”.

“Biden’s room for manoeuvre coming after Trump was always going to be limited,” the veteran trade expert said.

“Toss in whatever new obstacles the outgoing Trump team tosses into the mix, add a healthy dose of confusion over trade for both sides, fast deadlines for action, and legacy policies that will be hard to unwind and you have a recipe for a US government that is likely to be focused on a whole lot of things, but probably not much on trade.”

She added that a key Trump legacy was his “scrambling of traditional views on trade” within the Republican Party, saying that “Republicans in [Trump’s] image are less likely to support trade than 15 years ago”.

A Washington-based diplomat from an economy currently in the CPTPP pact – the smaller successor of the TPP that Trump abandoned – was of a similar mind.

The diplomat hoped there would be a change in tenor over multilateral trade if Biden won decisively.

But the chance of that happening was now unlikely, the diplomat said, with Trump’s sizeable support showing his protectionist outlook resonated with many Americans.

Trump’s legacy is likely to loom large over Biden in other aspects of foreign policy, too, particularly when it comes to China.

China was a major talking point in the pre-election presidential debates, with Trump alleging his challenger would ease the pressure on Beijing on trade and security.

Days before the Nov 3 polls, Biden’s advisers told Reuters that on the trade war – initiated by Trump – the Democrat was “not going to lock into any premature position before we see exactly what we’re inheriting” but would consult allies on the way forward.

Michael Vatikiotis, the Asia regional director for the Centre for Humanitarian Dialogue, said: “What will change is Washington’s approach, which will be more diplomatic and less unpredictable. A degree of coherence and focus may actually make these policies more effective and impactful, which many US policymakers would welcome.”

The conventional thinking was that Biden would retain Trump’s firmness with Beijing but eschew his pugilistic approach.

Murray Hiebert, head of research at the BowerGroupAsia consultancy, said Biden was likely to stick to Trump’s muscular stance with Beijing given the “bipartisan consensus that China has taken advantage of the US by stealing intellectual property [and] forcing tech transfers et cetera”.

However, Sneider warned the Trump-backing Republican caucus was likely to attack “any evidence they see, or can manufacture, of Biden being soft on China”, which in turn could force the new president to be cautious about changing course.

“But I still think he will want to seek a reset in relations with Beijing, though without retreating on some policies such as the handling of Huawei and technology competition,” Sneider said. “Of course, if the Chinese leadership decides to challenge a Biden administration over Taiwan, the South China Sea, or in other areas, it will force a tough response.”

In general however, even with a Republican senate, Biden’s policy in Asia was likely to be “coherent and consistent”, said Lee Morgenbesser, an international relations scholar at Australia’s Griffith University.

“The best method of achieving US interests will be fiercely debated, but at least the goals of US foreign policy will be agreed upon,” he said.

Sneider said Biden’s Asia policy was likely to be unhampered by Trump’s strong showing in the election, with a key priority likely to be the rebuilding and revival of US alliances frayed during Trump’s tenure.

Bremmer, who has used his widely followed social media account to criticise Trump throughout his presidency, said he was not too concerned about Trump’s influence on Washington’s foreign policy.

He said it was in domestic policy that liberals felt the president had done the most damage.

Others suggested that defending against Trumpism required looking beyond the man himself.

“The true danger for democracy in the United States is a populist candidate with the appeal of Trump, but without all his rough edges. Such a leader should be anticipated to emerge from within the [Republican Party],” said Morgenbesser.

The analysts however pushed back against the notion that Trump’s defeat was a harbinger of things to come for populist Asian leaders such as India’s Prime Minister Narendra Modi and the Philippine President Rodrigo Duterte.

Both leaders came to power before Trump, but have drawn comparisons to the US president because of their populist outlook on governance and authoritarian streak. Among those suggesting that Trump’s downfall could spell the decline of populism elsewhere was far-right rhetoric scholar Ruth Wodak.

The Lancaster University and University of Vienna professor was quoted in The Atlantic last week as saying defeat for Trump by a large margin would show that his model of “corruption and the undermining of liberal democracy… only works for so long”.

Thitinan, the Thai political scientist, said he did not have such an interpretation of Trump‘s defeat.

“But it does give hope and momentum to the forces of liberalisation, globalisation, and international cooperation that what remains of the rules-based liberal international order can still be salvaged up to a point,” he said.