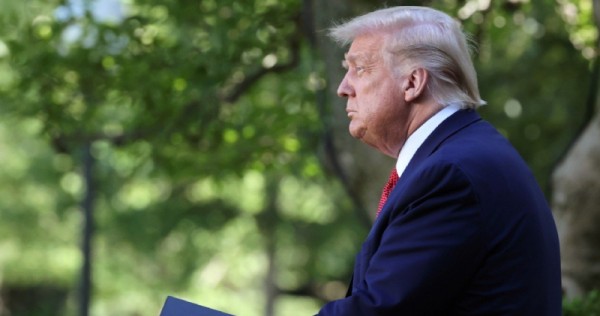 US President Donald Trump took two actions against China in response to Beijing’s moves on Hong Kong on Tuesday, signing an executive order ending the city’s preferential trade treatment, and enacting a bill that would require sanctions against foreign individuals and banks for contributing to the erosion of Hong Kong’s autonomy.

“Hong Kong will now be treated the same as mainland China,” Trump said in a news conference in the Rose Garden at the White House.

“No special privileges, no special economic treatment, and no export of sensitive technologies.”

Trump did not say when the new executive order’s provisions would go into effect, and the text of the directive is yet to be released.

The move could open up Hong Kong to the tariffs his administration has slapped on Chinese exports over the course of the trade war that has raged between Washington and Beijing for the past two years.

The latest salvos in Washington’s retaliation over Beijing’s imposition of a sweeping national security law on the city, the executive order and Trump’s signing of the Hong Kong Autonomy Act came shortly before a deadline for the US leader to sign or veto the legislation.

Introduced in late May, the bill breezed through both chambers of Congress in a handful of weeks – a quick turnaround in any congressional session, much less one dominated by coronavirus relief bills and police reform legislation as well as the looming fall elections.

With the bill having been approved by lawmakers via unanimous consent, a presidential veto would have been met with strong opposition from a Congress that has united around challenging Beijing on its actions, and could have been defeated by a two-thirds majority vote by lawmakers.

After unveiling his administration’s steps to punish Beijing over Hong Kong, Trump quickly veered the Rose Garden conference into unscripted yet familiar territory.

Over the course of a 50-minute, winding speech, he bashed his presumed Democratic presidential contender Joe Biden, attacked congressional Democrats, and defended his administration’s handling of the coronavirus pandemic, at one point doubling down on his reservations about widespread testing.

“Testing is a good thing but it’s fodder for the fake news to report cases,” he said.

To date, the coronavirus has killed more than 135,000 people and infected around 3.4 million in the US, now the epicentre of the global pandemic.

In the few moments he spent endorsing the new Hong Kong-related legislation handed to him by a united Congress, Trump said the law gave his administration “powerful new tools to hold responsible the individuals and the entities involved in extinguishing Hong Kong’s freedom”.

The act requires “mandatory sanctions” against any foreign individual for “materially contributing” to the violation of China’s commitments to Hong Kong under the Sino-British Joint Declaration and the Basic Law, the city’s mini-constitution.

Setting the terms of Hong Kong’s handover from British to Chinese rule in 1997, the Joint Declaration prescribed that the city would enjoy a “high degree of autonomy” until at least 2047.

Critics of Beijing, including US lawmakers, say that timeline has effectively been brought forward 27 years by China’s unilateral imposition of the national security law, specifics of which were publicised only after its implementation in late June.

The law criminalises a wide range of behaviour under four categories of subversion, secession, terrorism and collusion , and allows Beijing to extradite suspects to the mainland in certain cases.

The law is also extraterritorial, covering alleged crimes committed outside the city.

“Their freedom has been taken away,” Trump said on Tuesday of Hongkongers.

“Their rights have been taken away and with it goes Hong Kong, in my opinion, because it will no longer be able to compete with free markets.” He added that he thought “a lot of people will be leaving Hong Kong.”

Asked by a reporter whether he had plans to speak with Chinese President Xi Jinping in the near future, Trump said: “No I don’t. I have no plan to speak to him.”

Even before Trump had concluded his address, the Biden campaign responded with a statement accusing him of trying to “rewrite his miserable history as president of caving to President Xi and the Chinese government at every turn.”

“But try as he may,” the statement continued, “Trump can’t hide from a record of weakness and bad deals that consistently put China first and America last.”

The bill’s rapid passage through Congress was not without hitches. One Republican senator who co-sponsored the bill halted a vote at the request of the Trump administration, to allow a number of technical corrections that would give the Treasury Department a greater say in the designation of sanction targets.

And despite Senate approval in mid-June, senators had to vote on the bill a second time after its passage in the House of Representatives because of a procedural requirement that revenue-generating bills originate in the House.

In a statement issued later on Tuesday, the White House said that it was treating “as advisory and non-binding” certain provisions in the act related to the waiving or termination of sanctions.

Language in the bill approved by Congress gave lawmakers the ability to override sanction waivers by passing “disapproval resolutions”.