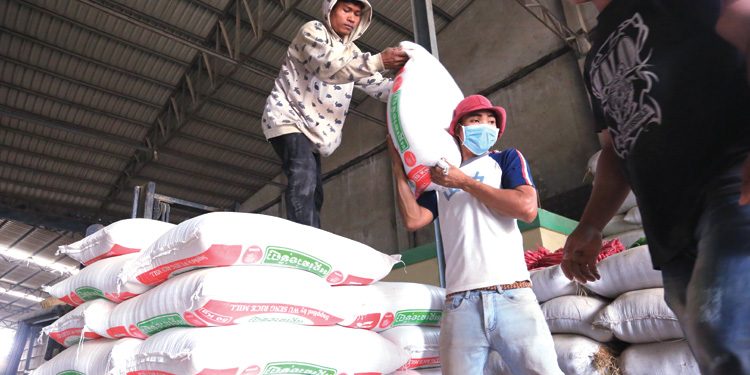 Cambodian rice exports to the US could face full tariffs after a lobby group called for the imposition of full tariffs on the crop.

Currently, the Kingdom’s rice enjoys some tax-protection under what is known as the Generalised System of Preferences (GSP)-eligible commodities list.

However, lobbyists USA Rice last month provided virtual testimony to the US International Trade Commission (USITC) in support of removing Cambodian rice from the list.

It submitted a petition to the Office of the US Trade Representative (USTR) in March advocating for the removal of rice from the list of GSP-eligible commodities. The petition has since moved forward into the formal review process, including a concurrent analysis by the USITC.

Lun Yeng, secretary-general of the Cambodia Rice Federation (CRF) said the move will not strongly affect Cambodia rice because the country sends a tiny amount of rice to the US market.

When they remove rice from the GSP-list, we will pay the full tax, but it will have a small impact on us because we export only about 2,000 tonnes a year to the US market. That is a small amount,” he said.

Yeng said for more than 10 years so far, Cambodia rice exports to the US have not exceeded more than 2,000 tonnes a year.

“In our plan as a private sector body, we are pushing rice exports to the US but it is still slow compared with other markets because of the higher cost of transportation and we cannot compete with Thai rice that has been in the market for a long time with exports of about 500,000 tonnes per year to the US market,” he said.

The US has long provided GSP benefits to developing countries, providing duty-free access for thousands of imports to help them grow their economies. For Cambodia, only travel-related products have been granted full duty-free status under the GSP.

Yeng said according to the World Trade Organization (WTO) framework, tariffs on rice exports under the GSP are between 85 percent and 180 percent, far higher than garment and textile products. Without the GSP, the product could see tariffs imposed up to 300 percent.

The GSP programme is set to expire on Dec 31 unless it’s reauthorised by Congress.

Rice grower organisations representing the six major rice-growing US states signed a joint letter with their corresponding state farm bureau organisations lending their support to the USA Rice petition.Cambodia’s rice sector officially lost its import duty exemption granted by the EU in January 2019 after the bloc decided to impose tariffs on imports from the Kingdom and Myanmar to protect European rice farmers’ interests. That loss comes into effect on Aug 12.

Rice exports to the EU increased by more than 45 percent. To China they rose by 25.2 percent. Other Asean members increased Cambodian rice imports by about 47.7 percent. Other market destinations surged by 79.26 percent.

Cambodia expects to export between 800,000 tonnes to 1 million tonnes of milled rice this year.