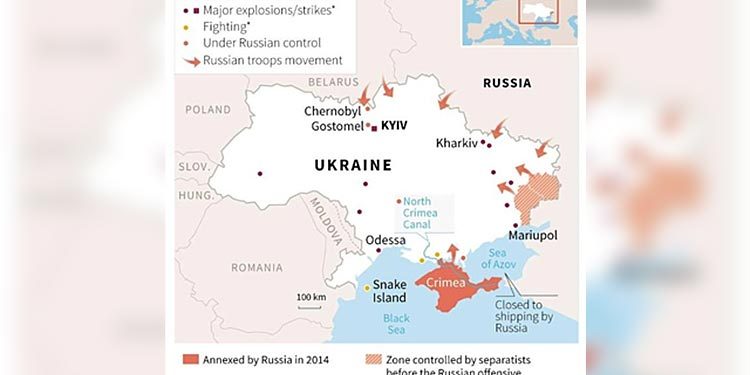 AFP – The uncertainty created by Russia’s invasion of Ukraine and its impact on the global economy is piling more complexity onto the US central bank’s already tough fight to contain rising prices.

Soaring energy and food costs have pushed inflation in the world’s largest economy to the highest pace in four decades, and the Federal Reserve is poised to raise the benchmark borrowing rate in March to put out the fire.

But while the Russia-Ukraine conflict is driving oil prices even higher, it also threatens to undercut the economic recovery from the Covid-19 pandemic.

“It just makes a time that was always going to be challenging all the more so,” Erica Goshen, a former senior Fed official, told AFP.

Fed policymakers will be “watching the data very carefully. It throws a few more considerations into the pot,” said Goshen, senior economics advisor at Cornell University’s School of Industrial and Labor Relations.

Crude prices briefly topped $100 a barrel on Thursday after Russia launched its invasion, the first time it passed that benchmark since 2014.

And wheat prices also could spike, as Ukraine is one of the top global exporters of the grain.

The Fed slashed the benchmark lending rate to zero at the start of the pandemic, and flooded the financial system with cash in an effort to stave off a severe recession.

Together with massive federal spending programs, that effort was largely successful: the economy bounced back quickly, with growth of seven percent in 2021.

But high demand, supply chain snarls and labor shortages have combined to push the Fed’s preferred inflation index to 6.1 percent in the year ended in January, far above the two percent target.

To contain the wave of price increases for energy, housing, cars and food, Fed officials for weeks have been preparing financial markets for coming rate hikes, hoping to engineer the elusive “soft landing” and avoid tipping the economy into recession.

Fed officials typically stick to generalities and hints, leaving markets to interpret their exact meaning, but in an unusually direct speech Thursday, Fed board member Christopher Waller said there could be a “strong case” for a half-point increase in the benchmark lending rate in the first hike next month, twice the usual move.

But the situation in Ukraine could change his thinking before the March 15-16 meeting of the policy-setting Federal Open Markets Committee (FOMC).

“Front-loading” a half-point increase “would help convey the Committee’s determination to address high inflation,” he said.

“Of course, it is possible that the state of the world will be different in the wake of the Ukraine attack, and that may mean that a more modest tightening is appropriate, but that remains to be seen.”

Goshen said some of this “tough talk” was to convince markets the Fed is serious, and to begin to move market rates and cool inflation pressures without being overly aggressive.

“Ideally they would achieve their goals without actually having to slow the economy down too much,” she added.

The central bank has said it will allow inflation to remain above two percent for some time, but Goldman Sachs commodities analyst Jeffrey Currie warned that “any disruption to commodity flows from Russia and Ukraine could raise concerns of a US inflation overshoot and a subsequent hard landing.”

Markets will pay close attention to Fed Chair Jerome Powell, who will present his semi-annual testimony to Congress Wednesday and Thursday.

Kathy Bostjancic of Oxford Economics said the Ukraine crisis has changed her view, and she now expects the Fed will opt for a “more conservative” quarter-point rate hike, even as inflation continues to accelerate.

But she added she is “closely watching wage growth, unit labor costs, and corporate pricing power since they play a critical role in determining the extent and speed by which inflation will slow later this year.”

What has the Russia-Ukraine sitch got to do with Singapore? Quite a lot leh