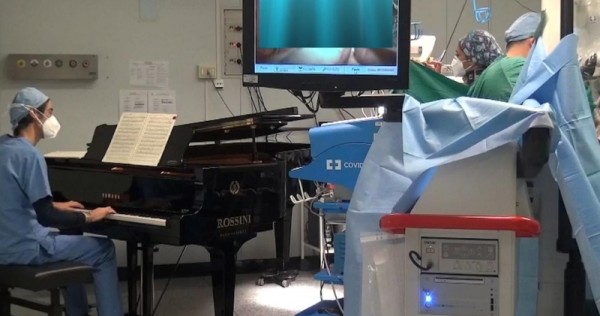 ROME  – During an operation to remove a double tumour in the spinal cord of a 10-year-old boy, doctors watching the brain activity of their patient saw a change when the music played on a piano next to him was interrupted.

As the team led by doctor Roberto Trignani was carrying out the four-hour operation, molecular biologist and musician Emiliano Toso played a grand piano in the operating theatre at a frequency recognised to have a therapeutic effect on the body.

“We have tried to stop and then restart the music, noticing the patient’s response, despite the fact that he was under total anaesthesia the brain perceived the music and this was very exciting,” Toso said.

Doctors said the patient was doing well but further tests were needed to see if another operation was required.

“Everything went well, there were no complications. There was a magical atmosphere of complete harmony,” Trignani, who leads the neurosurgery unit of the Riuniti hospital in the central Italian city of Ancona, was quoted as saying by Ansa news agency.