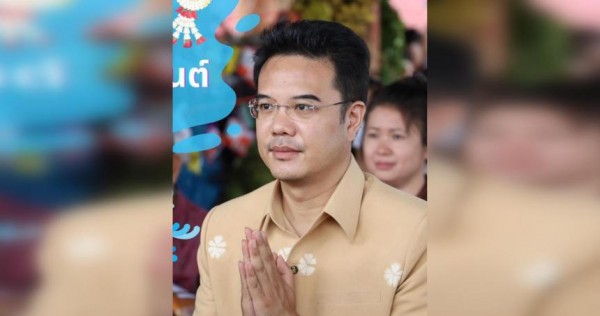 BANGKOK – Thailand’s Democrat Party has found itself mired in a sex scandal with its deputy leader, who quit all his party posts this week, facing three counts of sexual assault charges.

Four women have filed complaints against Prinn Panitchpakdi and police are seeking an arrest warrant for him, said Police Major General Trairong Piwpan, deputy commissioner of the Metropolitan Police Bureau.

The scandal involving the 44-year-old prominent politician erupted after an 18-year-old student alleged that he had sexually harassed her at a rooftop bar in Bangkok on Monday (April 11), according to local media reports.

Prinn, who is the son of former deputy prime minister Supachai Panitchpakdi, the previous chief of the World Trade Organisation and secretary general of the Secretary-General of the UN Conference on Trade and Development, has repeatedly denied the accusations.

The 18-year-old’s case was publicised by celebrity lawyer Sittha Biabangkerd, who said on Facebook that the alleged victim and her mother had sought his help over the incident.

“A young girl came to seek my advice. She said a deputy leader of a large political party had sexually harassed her. She said she was kissed on the cheek and was hugged, and the individual groped her bottom without her consent,” Mr Sittha said in the post on Wednesday which went viral.

While Mr Sittha did not name the politician or party involved, he said the man’s father was well-known around the world.

A day after the posting on Facebook, Prinn held a press conference where he acknowledged meeting the alleged victim at a restaurant but denied the accusations.

He also resigned from his positions in the Democrat Party, saying that this was in its best interests. Prinn was recently appointed director of the party’s campaigns for the Bangkok governor and city council elections scheduled for May 22.

“I insist I am innocent. I deny all allegations. They are groundless… Although what happened is a personal matter, it affects the Democrats,” he said.

On Saturday, Prinn turned up at the Lumpini police station in the capital with his lawyer and left after four hours.

Police said that three counts of sexual assault charges had been filed against the politician, including one for rape.

He was not detained, as he had voluntarily surrendered and an arrest warrant has not yet been issued, said the police. A warrant for arrest is expected on Sunday.

Prinn began his career in politics in 2019 as the head of the Democrat Party’s economic team where he was also part of a party-led panel condemning violence against women. He was not a sitting member of parliament.

On Thursday, former Democrat party member Hathairat “Anna” Vidhyaphum, 30, also publicly accused the politician of raping her a year ago.

Ms Hathirat, who is married to pro-democracy activist Thanat Thanakitamnuay, was running as a candidate in next month’s Bangkok city council elections under the umbrella of the Ruam Thai United party. But she withdrew her candidacy on Saturday to “prove” that her allegations were not politically motivated.

When asked for comment on Saturday, Democrat leader Jurin Laksanawisit reiterated the party’s stance against sexual harassment, adding that it would not protect anyone charged with committing such offences and that it would let the justice system run its course.

The Democrats, Thailand’s oldest party, has seen its influence waning after suffering major losses in the 2019 general election. It remains a core party in the governing coalition, but in recent months has been hit by a slew of resignations by key members.

The claims against Prinn have been brewing in the past week and, in follow-up Facebook posts, Mr Sittra has claimed that there were several other victims, all of whom were allegedly sexually harassed, molested or raped by the politician.

Russia says if Ukrainian forces in Mariupol lay down arms, their lives will be spared

U.S. arms to Ukraine from Javelin anti-tank missiles to body armor: Is it enough? Why?