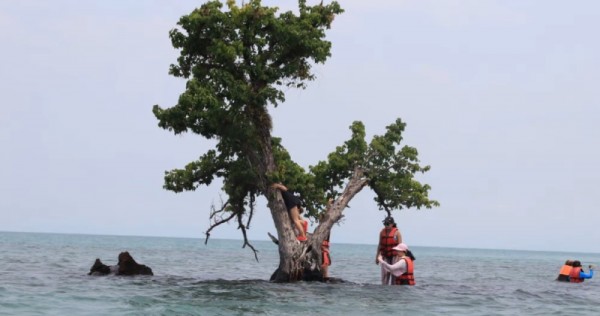 Thailand is fighting to save a lone tree on a small island off the country’s eastern coast from selfie-crazy tourists who have been blamed for its deteriorating health.

Officials said the uninhabited Koh Khai Hua Roh islet in Trat province, which is only a few metres wide, houses just the tree and its roots.

The area can only take in five tourists at a time, but it has been beset by visitors in the past few months after a traveller on Facebook said the site bore a resemblance to a scene from a popular Thai comic book.

The xylocarpus rumphii tree has been severely damaged by rampant overtourism as people often climb on it to take selfies, local authorities said after inspecting it on Tuesday.

Their review also revealed some branches of the tree were broken off, and its big root above the rock appeared to have been repeatedly trampled on.

Lertrob Saithongpu, the director of maintenance at Koh Mak Tambon Administrative Organisation, which manages the islet, told The Nation news website that the tree trunk had bent more than it did a few years ago, before the place became a tourist hotspot.

Lertrob said the local administration was working on measures, including restricting the number of tourists allowed to visit the island and only admitting them during certain seasons to prevent further damage to the tree. He added a conservation campaign would also be launched to raise awareness among tourists.

The Tourism Authority of Thailand’s branch in Trat also shared a series of posts about the tree on Facebook where dismayed netizens panned the holidaymakers for lacking “conscience” and urged them to protect the tree.

Thailand, which is aiming to attract 1 million tourists a month from October, announced last week it plans to end mandatory pre-departure registration for foreigners in a bid to revive its pandemic-battered travel sector.

Before the global health crisis, the overall tourism-related industry accounted for about a fifth of Thailand’s economy and jobs, with nearly 40 million overseas visitors in 2019, according to the central bank.

The Tourism Ministry will also propose restoration of visa-on-arrival for travellers from nearly all countries that were eligible before the pandemic, with the exception of some territories that are still battling Covid-19 outbreaks.

Protests break out in India over new military recruitment system