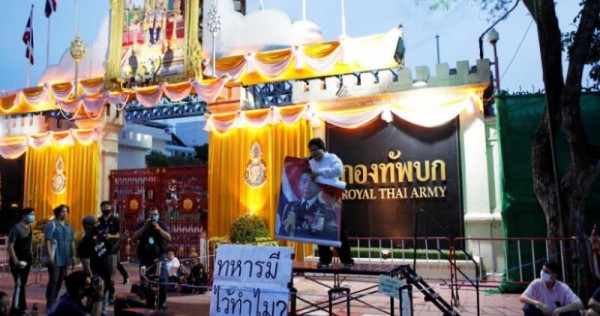 BANGKOK – Protesters rallied at the headquarters of Thailand’s army on Monday (July 20), accusing it of wasting taxpayers’ money on procurements and renewing demands for Prime Minister Prayuth Chan-ocha’s resignation, the latest show of public opposition to his rule.

About 200 demonstrators denounced the government and the army, accusing it of inappropriate defence spending and of interfering in politics by backing Mr Prayuth’s bloodless 2014 putsch, which saw him installed as prime minister.

Though Mr Prayuth now leads a civilian government following an election last year, critics say the military ensured the deck was stacked in his favour by writing a constitution that virtually guaranteed victory for his party.

The rally followed a protest in Bangkok on Saturday of about 2,500 people, who demanded the government dissolve parliament, step down and end harassment of its critics, in one of the biggest street demonstrations since the 2014 coup that ousted the last elected administration.

That rally and subsequent, smaller protests on Sunday in Chiang Mai, Ubon Ratchathani, were in defiance of a coronavirus ban on gatherings. Though police were present, there were no arrests.

Demonstrators on Monday displayed signs of detained or missing dissidents and carried placards saying “no coup” and reminding soldiers their duty was to the public.

One leader tore up a large poster of the army chief, General Apirat Kongsompong.

Mr Prayuth, a former army chief, has seen opposition to him grow recently. Since Thursday six of his Cabinet members have resigned.

Their exit comes as Southeast Asia’s worst performing economy, which the central bank says could shrink by a record 8.1 per cent this year, tries to recover from the impacts of the coronavirus crisis.