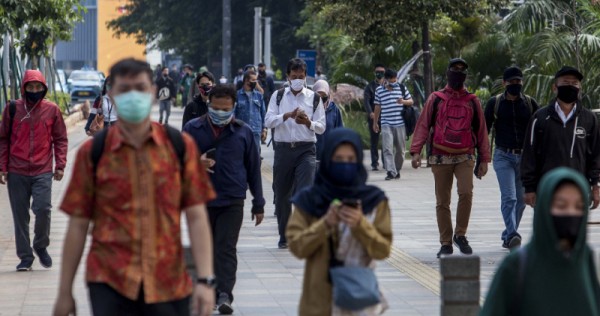 After almost a month of taking gradual steps to reopen the economy, Indonesia has seen its Covid-19 cases and deaths double as crowds reemerge in virus epicentres like Jakarta.

Experts have cautioned that the country is at risk of becoming one of the worst hit worldwide.

Indonesia had recorded 86,521 total cases and 4,143 deaths as of Sunday, twice the cumulative figure from the previous month.

The central government and local administrations gradually lifted requirements under large-scale social restrictions (PSBB) in the first weeks of June.

By June 18, the Health Ministry had recorded 41,431 cases and 2,276 deaths nationwide, surpassing Singapore for the first time as the Southeast Asian country with most officially reported cases.

The nation’s provinces have continued to experience a surge of infections and deaths, including Jakarta, where the share of positive test results out of the total tests administered had doubled to 10.5 per cent by last week.

As of Saturday, the total cumulative reported cases in Indonesia exceeded those officially reported in China, where the virus was first discovered, for the first time.

As of the same day, China had recorded 83,644 cumulative cases, according to the Chinese Centre for Disease Control and Prevention (CDC).

Epidemiologist Riris Andono Ahmad from Gadjah Mada University said Indonesia could see a shortened doubling period for Covid-19 cases, possibly causing the country to become one of the worst hit in the world if there was no intervention.

He mentioned several other potential hotspots, such as boarding schools, where a number of people from various regions tended to convene with limited social distancing.

Nationwide data compiled by volunteer group Kawal Covid-19 shows more than 8,000 deaths among PDPs and people under observation (ODPs), which the government has now renamed probable and suspected cases, respectively.

Starting in early June, offices reopened as restrictions were eased. Only Jakarta and its satellite cities and regencies began the transition out of PSBB, which allowed the gradual reopening of several service sectors.

Tangerang city and regency, as well as South Tangerang, remained under full PSBB, according to the national Covid-19 task force.

Government Covid-19 spokesperson Achmad Yurianto said recently that many of the new confirmed Covid-19 cases in Indonesia were found in office settings with poor air circulation and workers who were not wearing masks.

An epidemiologist at the University of Airlangga, Laura Navika Yamani, said with no mobility restrictions between provinces and cities that had different levels of risk, there could be a “widening spread of the virus” to areas that were thought to be virus free.

“The exponential growth of cases to even double

The virus has now reached 464 of the country’s 514 cities and regencies from 431 on the same date last month. Currently, 269 labs are in operation to conduct Covid-19 tests.

Despite a growing network of labs, Indonesia continues to have one of the lowest testing rates in the world, having tested 707,238 people so far.

The WHO report said that only Jakarta had met its minimum surveillance benchmark of 1 test per 1,000 people per week, one of the requisites for loosening restrictions that the government adopted in its latest Covid-19 prevention and handling guidelines.

Riris said that without any government intervention, there would be “very big” collateral damage after reopening.

“The epidemic is like burning fuel, and the fuel, in this case, is people without immunity. The sooner they’re burnt, the sooner it will end.

“But as a result, the healthcare system will be overwhelmed, fatalities will be high and the economy might collapse,” he said.