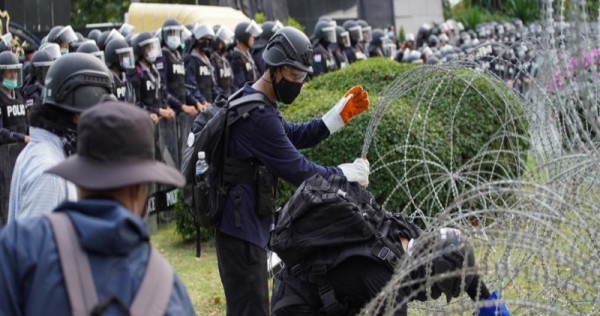 It was the latest act of defiance against the king by protesters who have broken taboos by criticising the monarchy. The Thai constitution says the monarchy must be revered and laws ban insulting the institution.

Protesters, many carrying inflatable ducks which have become a protest mascot, stopped at the gates of the 11th Infantry Regiment, part of the King’s Guard that played a role in the suppression of anti-establishment protests in 2010.

Lines of riot police blocked protesters at the gate.

“No democratic country sees a king control an army. In any democratic country with a king as head of state, armed forces report to the government,” said Arnon Nampa, a rights lawyer and protest leader who has been a frequent critic of the monarchy.

“We’ve been seeing the monarchy expanding its powers. That’s why we’re here today.”

The Royal Palace has made no comment since protests began, but the king hmself said recently that protesters are loved “all the same” despite their actions.

Protesters accuse the monarchy of enabling decades of military domination. There have been 13 successful coups since 1932, when absolute rule by the monarch came to an end.

Protests began in July and initially demanded the departure of Prime Minister Prayuth Chan-ocha, a former junta leader, and a new constitution. Demonstrators have expanded their demands since then to include curbs on the powers of the king.

Arnon is among several protest leaders facing charges under lese majeste laws against insulting the monarchy after speeches he made at previous rallies.

The Foreign Ministry said in a statement that Thailand adhered to the rule of law and the right to freedom of speech must stay within those boundaries.

“In every case where the law is violated, officials take action with strict adherence to the appropriate legal processes without discrimination,” the ministry said.

The prime minister has dismissed demands that he quit and rejected accusations that he engineered last year’s election to retain power after taking office in 2014.

Video shared on social media showed soldiers taking down a giant picture of the king and queen at the entrance to the barracks before the protest.

Vegetable planting in Cambodia up, but not yet feeding local demand in full