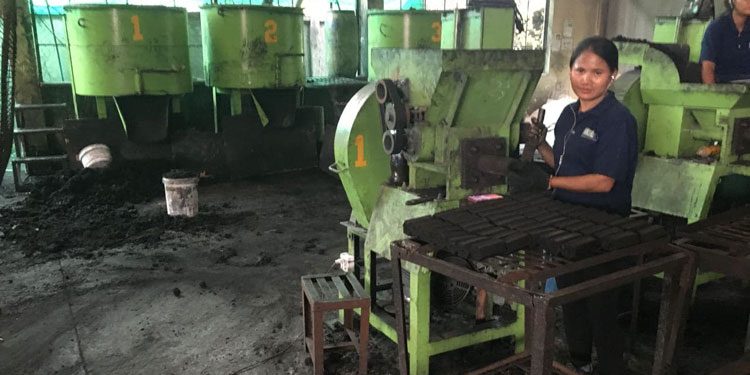 Rethinking how to utilise waste as a source of energy is a hot topic in Cambodia, a country short on power that also grapples with a mounting organic waste problem.

As the Kingdom tightens its belt amid the pandemic, innovative stakeholders are looking to explore the potential of a magic combination: turning waste into energy.

That is exactly the idea behind award-winning Khmer Green Charcoal (KGC), a 100 percent recycled biomass fuel made from waste products produced in the capital.

To help stakeholders better understand operations, KGC opened its doors as part of “Clean Energy Week Cambodia” to showcase an initiative that offers an energy alternative, complete with environmental and social benefits.

The KGC process starts with taking empty, hollowed-out coconut shells and mixing them with ash generated by local garment factories. That mixture is then pulverised, glued together with cassava starch and formed into briquettes.

A KGC representative stated, “Our factory operates [with] zero waste. We reuse the excess waste from the coconuts to create kindling and use discarded shells to fuel the ovens [that] dry the product. Our product actively offsets waste in its [fabrication process].”

He added that the end product is superior to wood charcoal in a number of ways.

“Our charcoal is odourless and smokeless and our premium charcoal product burns longer than wood charcoal. Our clients include Japanese and South Korean restaurants where they cook on an open barbecue.  Our product [emits] zero smoke as it burns, [which makes for a better experience] for customers.  This also makes it much healthier for household use,” the KGC spokesman noted.

He added, “By using KGC charcoal, people are saving Cambodian forests from illegal logging by reducing demand for wood, reducing CO2 emissions [as compared with burning conventional charcoal] and thus [contributing to] combating climate change. So far, our operations have saved a forest area equivalent to 400 football fields and every day we save the equivalent of one acre,” it said.

Sparked as a dual nongovernmental cooperative partnership, the KGC project has transitioned to private ownership that has maintained the project’s goals while enhancing its corporate portfolio by improving on those founding ideas.

A company statement reads, “KGC aims to alleviate poverty, reduce deforestation and contribute to improving waste management in urban and rural areas. In doing so, we have developed a clean cooking fuel that provides a sustainable alternative to wood-charcoal consumption. We now supply biomass green charcoal to more than 6,500 end-users in Cambodia.”

With much of the waste generated in the capital being organic, the contribution of innovations will prove important in the battle against the rapidly growing problem of urban waste management.

Compost City founder Monorom Tchaw agrees, saying, “Waste in Cambodia is predominantly organic and nearly 70 percent of [that is generated in] Phnom Penh, if you include compostable materials such as paper and cardboard. Repurposing and recycling are just as important a way of dealing with our waste as reducing consumption.”

While KGC’s mandate in operation goals starts with creating their product directly from the city’s waste, it is also focused on creating jobs for locals.

The company shared how, in collaboration with ‘Pour un Sourire d’Enfant’, a social nongovernmental organisation (NGO) for child protection, it selects its workers from among the most vulnerable communities in Phnom Penh. Inspired by European working standards, KGC is committed to ensuring fair salaries as well as sending workers’ children to school thanks to study programmes implemented by their partner NGO.

“We [also] use suppliers and middlemen to pick up waste from markets. By selling this waste product, middlemen can earn up to $60 from coconut shells,” said a KGC representative.

However, the company has been affected by the pandemic.

“We lost 70 percent of our sales in 2020 because of COVID-19. It is a big challenge because Cambodia is not yet sensitive to environmental sustainability specifically. There should be more awareness and understanding about sustainable energy,” the company said.

Still, KGC remains dedicated to the product, producing some four tonnes of char-briquettes per day to supply restaurants and street food vendors throughout Phnom Penh.

The WorldBridge i4.0 SME Cluster project in Cambodia breaks ground