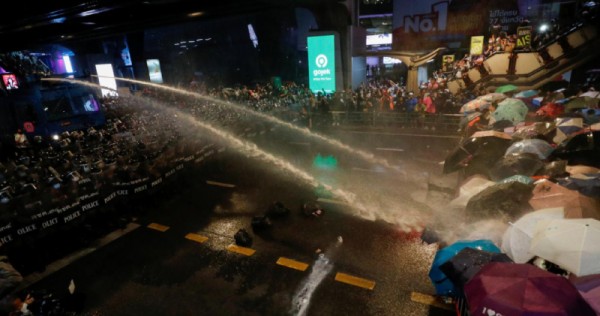 BANGKOK: Thai police used water cannon yesterday against thousands of protesters marching to deliver a message to King Maha Vajiralongkorn to demand reforms to curb the powers of his monarchy and the removal of the government.

It was only the second time water cannon had been used in months of largely peaceful protests to call for greater democracy and the departure of Prime Minister Prayuth Chan-ocha.

“Reform or revolution,” read one placard. The protesters reached a barricade of buses and barbed wire.

Police fired water cannon to stop them from pushing forward, but witnesses said some had managed to reach the area known as Sanam Luang – or Royal Field – next to the Grand Palace.

Protesters sought to deliver a message to the Royal Household Bureau. “We no longer want the monarch to interfere in politics,” protest leader Jutatip Sirikhan said.