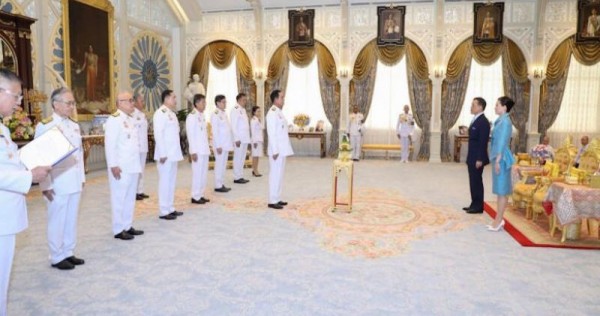 BANGKOK – Thailand’s King Maha Vajiralongkorn swore in a new cabinet on Wednesday (Aug 12), calling for “order and peace” but without mentioning recent anti-government student protests that have urged reforms of the powerful monarchy.

The ceremony marked the king’s first public appearance since the nearly unprecedented calls in two student-led protests for curbing the new powers King Vajiralongkorn has amassed since taking the throne after the death of his father in 2016.

The king, as head of state, gave his blessing to the new cabinet members, wishing “good health and wisdom to have the strength to perform your duties according to your oaths”.

He did not publicly acknowledge the student protests, some of which defied “lese majeste” laws against insulting the monarchy that carry a maximum 15-year prison sentence.

Prime Minister Prayut Chan-o-cha said on Tuesday that thousands of student protesters “went too far” after some issued a 10-point call for reform of the monarchy, which is considered semi-divine in the country’s conservative culture.

So far, no protest leaders have been charged under the lese majeste laws, though two key leaders were arrested on charges including sedition and violating coronavirus regulations on large gatherings before being released on bail.

Wednesday’s sfaysal testing in of the new cabinet members follows the resignation last month of six ministers under Prayut, amid ruling party internal disputes as the government faces the growing protest movement.

Association Banks of Cambodia: More than $2 billion in loans restructured from March