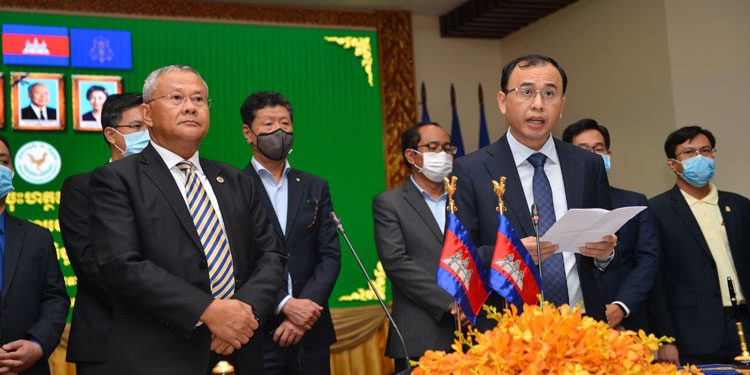 Techo Startup Centre (TSC), under the Ministry of Economy and Finance and the association of banks in Cambodia, yesterday signed a memorandum of understanding (MoU) on cooperation to promote financial technology systems in Cambodia.

The MoU aims to promote financial inclusion and expand the scope of work in startups and financial technology (FinTech) sectors in support of Cambodia’s digital economy. The apparent unending of advances in digital technology and telecommunications have made digitalisation and integration in the form of digital chains take place in all sectors, including finance.

The potential of this new technology will become an important lever in the socio-economic development of the digital economy.

Undersecretary of State of the Ministry of Economy and Finance, and Chairman of Techo Startup Centre (TSC) Kong Marry said that Cambodia’s vision is to become a middle-income country by 2030 and high-income country by 2050 through diversification of the economy.

He said that in Cambodia FinTech has grown remarkably in the last five years because there are more bank accounts and e-wallets that connect with mobile applications for transactions, payrolls and online transactions. However, Cambodia has also faced challenges in the FinTech sector, including a lack of regulation and framework, lack of coordination between institutions, lack of data to evaluate risk and lack of human resources.

“The signing ceremony between TSC and ABC became a new milestone to support FinTech as well as training in the startup sector,” Marry added.

The development of FinTech plays an important role in building the digital economy as a whole and, in particular, promoting financial inclusion.  The digital economy policy draft addresses the need to set up a national payment system, a part of financial technology, to drive the development of e-commerce, last-mile delivery and other online services.

The MoU enables  ABC to work with TSC to participate in the Fourth Industrial Revolution (4IR) in Cambodia’s digital economy plan through supporting, strengthening and expanding new startups.

“It also creates an obligation for the law to be updated and the creation of regulations to protect public safety and socio-wellbeing. The ABC will work with TSC to support strategy, technical know-how and financing and it vows to support the mission and programmes of both parties directly and indirectly,” Channy said.

According to Marry, TSC has recently transformed itself into a public administration institution with the fundamental duty to support startups and promote their development in an effort to increase the chances of them becoming successful businesses.

With the support of ABC and its members in the area of technical and business consultation, this cooperation will enable TSC to develop more support programmes for startups in the financial technology sector, he added. In response to the policies and efforts of the government, TSC said it will continue to strengthen and expand collaboration with both national and international institutions.