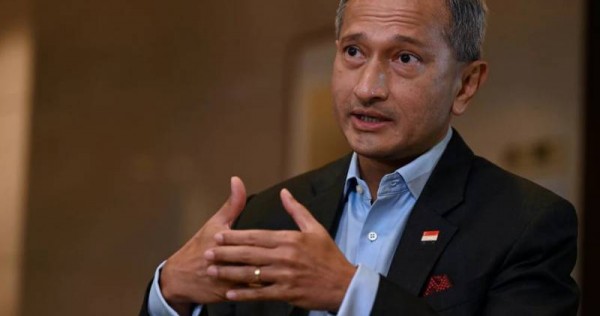 “Their different approach to the war in Ukraine is the latest complication,” Vivian said in a keynote address at the South China Morning Post’s China Conference: Southeast Asia, adding it would be “disastrous for both powers to focus on extreme competition or even confrontation” and that “the old Cold War strategy of containment will not be viable in this emerging multipolar world”.

A deterioration in ties between the countries would only serve to harm global efforts to deal with long term problems like climate change, he said.

In the 15-minute speech, he said the world was on the verge of a dangerous moment in the aftermath of the Covid-19 pandemic and Russia’s war in Ukraine, and urged governments to double down on efforts to hold together the international rules-based order.

He also reiterated the city state’s frequently-emphasised position that geopolitical shifts shaping an emergent “multipolar order” required the US, China and all other powers to abide by a new modus vivendi, or way to get along.

The escalating US-China superpower rivalry and rising anxieties about social mobility and inequality were prime drivers of the shift, he said.

But “it’s really the two more recent events, Covid-19 and especially the war in Ukraine that have truly marked the end of this post-World War II golden era,” Singapore’s top diplomat said in the recorded speech for the conference.

Vivian said that a lot was at stake for the European Union and Asia.

Peace and prosperity based on international law, the principles of the United Nations Charter, trade liberalisation, the “amazing progress on a single technological stack” especially in the digital sector and life sciences, as well as just-in-time supply chains and low defence expenditure were all at risk, he said.

“A new era is being born, and the most dangerous moment is at its birth — when rules, norms and expectations are not yet set,” he said. “And so we live in dangerous times.”

Of immediate concern, said the foreign minister, was the outcome of the war in Ukraine and its “attendant impact on the global order”.

In the short term, the risk of stagflation remained high, Vivian said, noting the severe impact war had on societies in the 1970s, which led to supply and demand shocks as well as high inflation — especially in energy and food prices.

In the medium term, the risk of new Covid-19 variants and a future pandemic continue to loom even as Omicron continues to recede in most countries. The climate crisis, meanwhile, remained an existential threat, Vivian noted, pointing to various recent weather incidents including floods in China, Australia and Southeast Asia.

The minister elaborated on how the multipolar order was shaping up in economic terms, noting China’s emergence since 1990, when the US economy was more than 10 times the size of Russia or China.

The US still continues to have about 25 per cent of global GDP, and China’s share of the world economy stood at around 17 per cent in 2020.

The European Union and Britain, Vivian noted, collectively account for 21 per cent of world GDP and the 10 nations that make up the Association of Southeast Asian Nations (Asean) will become the fourth largest global economy by 2030.

And amid expected major shifts in this regard in India, Latin America, Africa and Russia, there was a need for countries to uphold international law, Vivian said, emphasising a key tenet of Singapore foreign policy repeated with increased frequency in the aftermath of Moscow’s unprovoked aggression in Ukraine.

Cooperation can begin via bilateral or “plurilateral” agreements before they grow into wider arrangements, Vivian said, citing the example of the digital economy partnership agreement Singapore has with Chile and New Zealand. That pact has since received accession applications from South Korea and China.

Existing UN-linked bodies such as the World Health Organisation and the World Trade Organisation needed to be fortified and countries must support efforts to ensure they are “fit for purpose to meet the challenges of managing our global commons,” Vivian said.

Also speaking at the start of the two-day conference was Deng Xijun, China’s ambassador to Asean. The Chinese envoy said Beijing was committed to enhancing ties with the region.

“It is of paramount importance for us to uphold genuine multilateralism and insist that international and regional affairs be handled through consultation,” Deng said. “China firmly opposes hegemonism and power politics and is willing to keep long-term friendly relations with its neighbouring countries and jointly maintain lasting peace region-wide,” he said.

On the South China Sea dispute between the Asian power and some Asean nations, Deng said China hoped to “speed up” ongoing consultations for a code of conduct between parties in the disputed area. “Peace and stability in the South China Sea requires the joint efforts of all parties,” he said.

“Countries in the region could and should be good navigators and hold the key to peace and stability in the South China Sea in their own hands”.