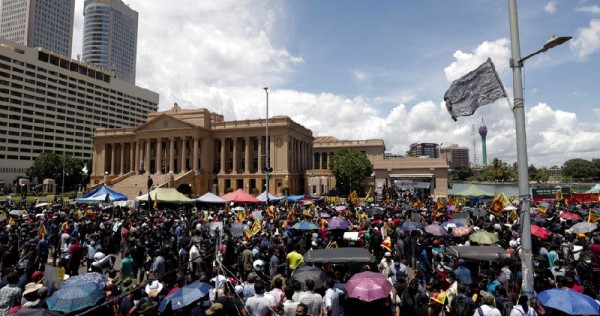 Hundreds of employees from Sri Lankan state-run banks, most wearing black and carrying black flags, also joined other bank trade unions in a protest march to the president’s office as thousands of people took to the streets around the country.

“This government has ruined our country. Costs are increasing every day, businesses are closing, and people have no way to live. There is no fuel, when we go home there is no electricity and no cooking gas to make meals,” said Samanthi Ekanayake, 34 who works as a teller at a state-run bank.

“We are tired of broken promises.”

The country’s trade union leaders have threatened an ongoing strike from May 6 if the president and the government do not resign.

Rajapaksa this week reiterated his willingness to form an interim government with a new prime minister and cabinet. However, Prime Minister Mahinda Rajapaksa, who is his elder brother, has declined to step down and insisted he continues to have a majority in the 225-member parliament.

Meanwhile, two Opposition parties, the Samagi Jana Balawegaya (SJB) and the Tamil National Alliance (TNA) have started the process to bring no-confidence motions against the president and prime minister in parliament.

“Political instability will only make it more difficult to provide solutions to the financial crisis. So it is imperative a strong government with a clear majority is established in parliament and the government is working towards this goal,” Cabinet spokesman Nalaka Godahewa said.