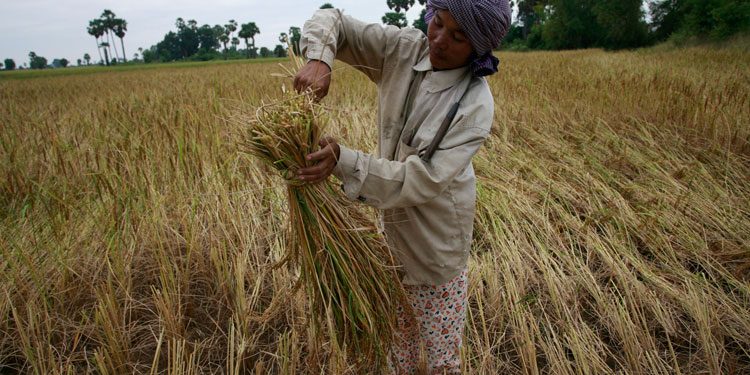 The state-owned Agriculture Rural Development Bank (ARDB) has begun disbursing its new $30 million government special fund to rice millers and exporters to coincide with the harvest season, said a senior executive of the bank.

Kao Thach, director-general of the Agriculture Rural Development Bank (ARDB), noted that funds are being released on a step-by-step basis. “In this initial stage, we have released around $3 million already,” he said. The balance will be distributed during the harvest of the premium aromatic rice varieties, Romdul, Romdeng, Romeat and Somaly.

Thach noted that this new fund comes on the heels of the $50 million special loan already distributed to millers and exporters for the fragrant  and Sen Kro Ob rice harvest conducted earlier.  He said that the new funding was needed to facilitate new purchases by millers from rice farmers.

“Provinces that were not affected by floods did not experience the delays in harvesting that affected regions did. As a result, loans will continue to be delivered between January and February. The percentage of non-performing loans is being well-managed and the bank has also been actively restructuring loans until customers are able to make repayments,” he said.

He said his cooperative has 27 members farming a total of 20 hectares. They sell their paddy to Amru at a contracted price of 1,620 riel per kilo for “best quality” and 1,580 riel per kilo for second grade. Farmers selling either grade directly to brokers receive just 1,300 riel per kilo.

Mon himself currently farms four hectares of land that yield seven tonnes per season. He confirms that contract farming provides him with a higher price than that offered by brokers.

Song Saran, president of the Cambodia Rice Federation (CRF) and the CEO of Amru Rice (Cambodia), said that despite declining prices for Thai Hom Mali and Jasmine rice (down by over 30 percent in recent weeks), CRF millers and exporters are doing their best to maintain the best price for producers by using the funds from ARDB.

Saran added some CRF members who have rice stock as collateral have already submitted applications to the ARDB to get new loans. “For Amru, where we only purchase product that meets organic and sustainable rice standards, that translates to buying around 30,000 to 40,000 tonnes,” he said.

He added that the $30 million is sufficient to purchase paddy from farmers because now CRF members are purchasing more paddy to keep in stock. “We expect that with the amount of money available from the government, we can collect more than 110,000 tonnes of paddy. We are confident that members can use the combination of the previous and new loan from the ARDB to purchase the paddy they need,” Saran said.

Cambodian rice export gross revenues reached $366.44 million in the first 10 months of 2020, according to the CRF. Exports for the first 10 months of 2020 reached 536,035 tonnes, an increase of 17.11 percent compared with  the same period in 2019. Cambodia produces more than 10 million tonnes of paddy a year, unofficially exporting most of it to the Vietnamese market to the tune of more than 2 million tonnes annually, according to figures from
the Ministry of Agriculture, Fisheries and Food.

Thai King writes messages of love for nation amid protests