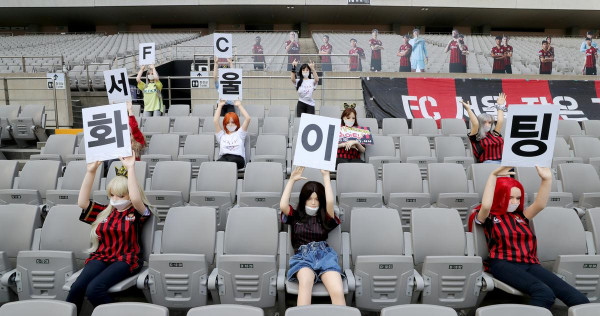 SEOUL – South Korean football club FC Seoul have apologised after they used sex dolls instead of mannequins to fill seats during a K League match at their empty stadium on Sunday.

Seoul’s match against Gwangju was being played without spectators due to ongoing measures to combat the Covid-19 pandemic.

Some of the dolls had been dressed in the club’s uniform while others were holding placards supporting the team, but fans watching the match on television immediately took to social media to raise doubts about the inflatable spectators.

“Just look at their breasts, they were four times bigger than those of normal mannequins,” one fan wrote on the club’s official Instagram account.

The club issued a statement on Monday saying the supplier had told them the dolls were not “adult products” but apologised for failing to check.

“We wanted to bring some fun elements to the no-fans game and give the message that we can overcome this difficult period,” it said.

“We had confirmed that the mannequins were made as if they were real but had nothing to do with adult products.

“But the problem was we failed to make detailed checks, which is our fault without a doubt.”

One fan wrote that it was “so obvious” they were sex dolls and that it had undermined FC Seoul’s efforts “to show games for all the family”.

The manufacturer of the dolls, Dalcom, was not available for comment. Calls seeking comment from the K League were unanswered.

The incident will come as a setback for the K League, which is enjoying a profile like never before as one of the only top-flight soccer leagues active during the pandemic.

Broadcasters from 10 countries, mostly in Asia and Europe, have bought rights for the season.

Cambodia Kampot Pepper has now been stymied because of COVID-19