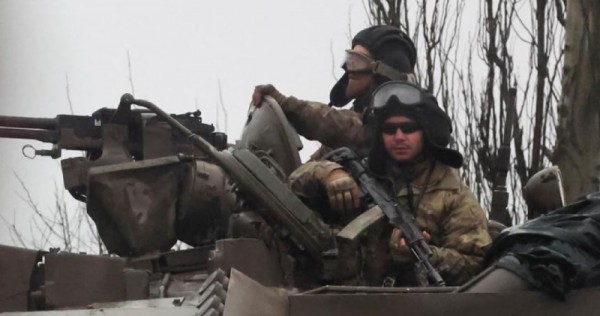 MOSCOW/KYIV – Russia launched an all-out invasion of Ukraine by land, air and sea on Thursday (Feb 24), the biggest attack by one state against another in Europe since World War Two and confirmation of the worst fears of the West.

Russian missiles rained down on Ukrainian cities. Ukraine reported columns of troops pouring across its borders into the eastern Chernihiv, Kharkiv and Luhansk regions, and landing by sea at the cities of Odessa and Mariupol in the south.

Explosions could be heard before dawn in the Ukrainian capital Kyiv. Gunfire rattled out near the main airport and sirens blared across the city.

A resident of Ukraine’s second largest city Kharkiv, the closest big city to the Russian border, said windows in apartment blocks were shaking from constant blasts. The city was gripped by panic as people tried to flee, said the resident, who asked not to be identified.

“This is a war of aggression. Ukraine will defend itself and will win. The world can and must stop Putin. The time to act is now.”

At least eight people had been killed and nine were wounded by the Russian shelling, an advisor to the Ukrainian Minister of Internal Affairs said.

Putin declared in a televised address that he had ordered “a special military operation” to protect people, including Russian citizens who had been subjected to “genocide” in Ukraine, an accusation the West has long described as absurd propaganda.

“And for this we will strive for the demilitarisation and denazification of Ukraine,” Putin said. “Russia cannot feel safe, develop, and exist with a constant threat emanating from the territory of modern Ukraine…All responsibility for bloodshed will be on the conscience of the ruling regime in Ukraine.”

Ukraine, a democratic country of 44 million people with more than 1,000 years of history, is the biggest country in Europe by area after Russia itself. It voted overwhelmingly for independence from Moscow after the fall of the Soviet Union and says it aims to join NATO and the European Union.

Putin, who denied for months that he was planning an invasion, has called Ukraine an artificial creation carved from Russia by enemies, a characterisation Ukrainians call shocking and false.

US President Joe Biden said his prayers were with the people of Ukraine “as they suffer an unprovoked and unjustified attack”, while promising tough sanctions in response.

He would be meeting with G7 leaders, he said.

“These are among the darkest hours of Europe since the Second World War,” Borrell said.

The full scope of the Russian military operation was not immediately clear but Putin said: “Our plans do not include the occupation of Ukrainian territories. We are not going to impose anything by force.”

Speaking as the UN Security Council held an emergency meeting in New York, Putin said he had ordered Russian forces to protect the people and appealed to the Ukrainian military to lay down their arms.

Zelenskiy appealed to world leaders to impose all possible sanctions on Russia, including on Putin.

Earlier, Ukrainian media reported that military command centres in Kyiv and the city of Kharkiv in the northeast had been struck by missiles, while Russian troops had landed in the southern port cities of Odessa and Mariupol.

A Reuters witness later heard three loud blasts in Mariupol. Russian-backed separatists in the east later said they had captured two towns, the RIA news agency reported. There was no immediate comment by authorities in Ukraine.

Russia announced it was shutting all shipping in the Azov Sea. Russia controls the strait leading into the sea where Ukraine has ports including Mariupol.

Hours before the invasion began, the separatists issued a plea to Moscow for help to stop alleged Ukrainian aggression – claims the United States dismissed as Russian propaganda.

Global stocks and US bond yields dived, while the dollar and gold rocketed higher after Putin’s address. Brent oil surged past $100/barrel for the first time since 2014.

Queues of people waited to withdraw money and buy supplies of food and water in Kyiv. Traffic was jammed going west out of the city towards the Polish border. Western countries have been preparing for the likelihood of hundreds of thousands of Ukrainians fleeing an assault.

Biden, who has ruled out putting US troops on the ground in Ukraine, said Putin had chosen a premeditated war that would bring a catastrophic loss of life and human suffering.

“Russia alone is responsible for the death and destruction this attack will bring, and the United States and its Allies and partners will respond in a united and decisive way,” said Biden, who spoke to Zelenskiy by telephone.

UN Secretary-General Antonio Guterres, speaking after the Security Council meeting, made a last-minute plea to Putin to stop the war “in the name of humanity”.

China, which signed a friendship treaty with Russia three weeks ago, reiterated a call for all parties to exercise restraint and rejected a description of Russia’s action as an invasion.

Ukraine closed its airspace to civilian flights citing a high risk to safety, while Europe’s aviation regulator warned against the hazards to flying in bordering areas of Russia and Belarus.