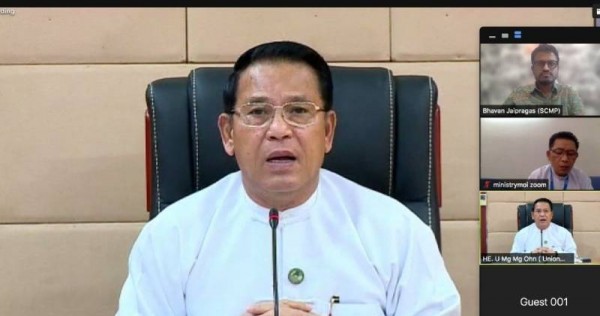 Myanmar’s ruling generals are the subject of a global “fake news” campaign that unfairly pins blame on them for the country’s violence and sees no scope for negotiations with anti-coup militias, a junta minister has claimed.

In a new interview with the South China Morning Post, the junta’s information minister Maung Maung Ohn also doubled down on criticism of the Association of Southeast Asian Nations (Asean).

He said there was no chance of military authorities allowing the bloc’s special envoy to meet the detained Aung San Suu Kyi when he visits Myanmar next month.

Like on previous occasions when he spoke to the Post, the minister reinforced junta propaganda about the ground situation that starkly contradicted credible reporting by United Nations agencies, independent rights monitors, open-source intelligence as well as local witnesses.

Recent burnings of villages, for instance, were the work of anti-coup forces rather than the military, Maung Maung Ohn insisted. Those reporting these incidents relied on the accounts of “unnamed villagers” and the conclusion was that these individuals were set on undermining the country’s security, he said.

In reality, the international media has relied on information about the attacks from groups such as the Centre for Information Resilience – which independently records, verifies and investigates incidents.

The group’s investigations have verified incidents such as the military’s involvement in massacres in the city of Bago last April and in Kayah state on Christmas Eve.

“I would like to say that we are responsible to address such kinds of fake news and all international and local media need to publish and report true news in accordance with media ethics,” Maung Maung Ohn said in the Zoom interview on Wednesday (Feb 23).

In the face of “biased” media reports, the junta official said he hoped news outlets such as the Post would share the “true situation about Myanmar to the rest of the world”.

In the hour-long session, he sought to suggest civil strife in the country was not as great as had been reported, and instead underscored progress in an ongoing peace process with ethnic armed groups that are party to a ceasefire agreement that pre-dates last year’s coup.

The presence of some of these groups at a recent ceremony to mark the country’s 75th anniversary of independence from Britain exemplified this progress, Maung Maung Ohn said.

“In 2022 the State Administration Council is giving priority to, and will move forward with, the peace process,” he said, using the junta’s title for itself.

A poster with pictures of people killed by Myanmar’s junta troops at the Assistance Association for Political Prisoners office in Mae Sot, Thailand. PHOTO: Reuters

But any form of engagement with militias aligned with the National Unity Government, the shadow anti-coup administration, was out of the question.

“Addressing political, economic and social affairs in a legal way within the law is the main basic principle of a nation,” the minister said. But the NUG-aligned forces, who were partaking in “unlawful murder, setting fires, planting mines and bombing” were “enemies and traitors”, he said.

“They are violating the law … they are undermining peace and stability, so there is no way to negotiate with terrorists,” he said.

The minister dismissed questions about the military’s weakening power amid fierce fighting with some ethnic armed organisations and the NUG-aligned militias – though independent observers say government forces are increasingly facing a resource-sapping battle of attrition in places such as the Sagaing region, as well as in the Chin, Kayah and Kachin states.

He also dismissed a question about rising defections from the ranks of the Tatmadaw, as the military is known.

He said defectors from the military and police would be dealt with in accordance with the law.

The minister said anti-junta forces had “destroyed” 525 roads, 27 hospitals and clinics as well as 504 schools and education buildings. Twenty monks and 95 civil servants were killed and 135 service personnel were injured between the coup last February and January this year, he said.

Soldiers are deployed during a protest against the military coup, in Yangon, Myanmar. PHOTO: Reuters

The minister said authorities had received “complaint letters from the public on their experience of threats from the terrorists”.

The Assistance Association for Political Prisoners, a local monitor whose figures are relied upon by the UN, says 1,572 people have been killed by the junta since the coup, with 9,313 arrested, jailed or convicted of crimes.

On Asean, Maung Maung Ohn confirmed that Prak Sokhonn, Cambodia’s foreign minister and deputy prime minister, was expected to visit to Myanmar in March in his capacity as Asean’s special envoy.

The Asean bloc’s foreign ministers met last week, with Myanmar’s representative absent as the bloc continues to enforce a policy of isolating the ruling generals until there is progress on a previously agreed peace road map.

Following the meeting, the junta’s foreign ministry issued a statement blasting “two members” of the 10-nation group for suggesting that Prak Sokhonn should engage with “unlawful associations and terrorist groups which the Myanmar government has declared as terrorist groups”.

Malaysia and Indonesia have been at the forefront of suggesting that Asean should openly engage the NUG – which is made up of allies of Suu Kyi who are in exile or hiding.

A protest against the military coup, in Yangon, Myanmar. PHOTO: Reuters

Singapore , which like Indonesia and Malaysia, has taken a tough stance on the junta publicly, has indicated it does not envisage a resolution to the crisis without Suu Kyi’s involvement.

“If you were asking me for advice, I would say that I cannot imagine any solution right now without Daw Aung San Suu Kyi – but that is not my position nor my call,” the city state’s foreign minister Vivian Balakrishnan said last week.

In the interview, Maung Maung Ohn reiterated that Prak Sokhonn would have no access to Suu Kyi or other members of the deposed National League for Democracy (NLD) who are currently detained. The criminal charges against these leaders are widely seen as politically motivated.

“Next month the special envoy will be coming, but the meeting with the ones facing trial will not be allowed. It is according to international practice,” he said.