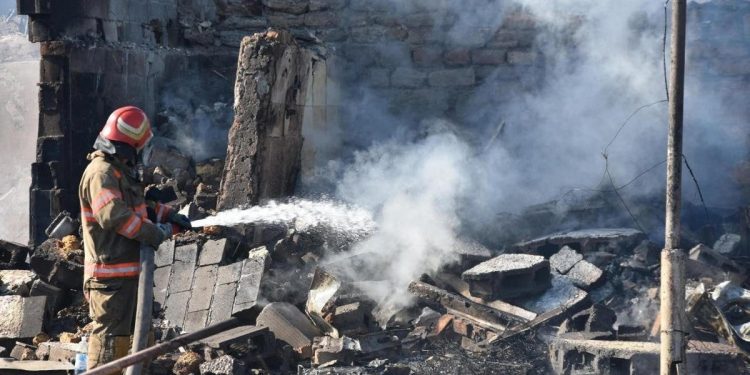 The command posted video Tuesday that appeared to show smoldering rubble and destroyed buildings with the caption: “The consequences of today’s rocket shelling across the Odessa region.”

In the Odesa region, a number of private buildings in villages on the coast were hit and caught fire, the report said. In the Mykolaiv region, port infrastructure was targeted.

Hours after the renewed strikes on the south, a Moscow-installed official in the southern Kherson region said the Odesa and Mykolaiv regions will soon be “liberated” by the Russian forces, just like the Kherson region further east.

“The Kherson region and the city of Kherson have been liberated forever,” Kirill Stremousov was quoted as saying by Russian state news agency RIA Novosti.

The developments came as Ukraine appeared to be preparing a counteroffensive in the south. Russia previously attacked Odesa’s port at the weekend. The British military said Tuesday there was no indication that a Ukrainian warship and a stockpile of anti-ship missiles were at the site, as Moscow claimed.

The British Defense Ministry said Russia sees Ukraine’s use of anti-ship missiles as “a key threat” that is limiting its Black Sea Fleet.

“This has significantly undermined the overall invasion plan, as Russia cannot realistically attempt an amphibious assault to seize Odesa,” the military said. “Russia will continue to prioritize efforts to degrade and destroy Ukraine’s anti-ship capability.”

It added that “Russia’s targeting processes are highly likely routinely undermined by dated intelligence, poor planning, and a top-down approach to operations.”

Russian shelling over the previous 24 hours killed at least three civilians and wounded eight more in Ukraine, the president’s office said Tuesday. In the eastern Donetsk region, where the fighting has been focused in recent weeks, the shelling continued along the entire front line, with the largest cities of the region, including Bakhmut, Avdiivka and Toretsk, being targeted by the Russian forces, a statement said.

“There is not a single safe place left, everything is being shelled,” Kyrylenko said in televised remarks. “But there are still evacuation routes for the civilian population.

“The Institute for the Study of War, based in Washington, D.C., reported that the Russians are using mercenaries from the shadowy Wagner Group to capture the Vuhledar Power Plant on the northern outskirts of the Novoluhanske village. But the Russian forces have made “limited gains” there, according to Ukraine’s General Staff.

The main Russian focus has been on capturing Bakhmut, which Moscow’s forces need in order to press their offensive on the main Ukrainian strongholds in Donetsk, Sloviansk and Kramatorsk.

“Russian forces made marginal gains south of Bakhmut but are unlikely to be able to effectively leverage these advances to take full control of Bakhmut itself,” the Institute for the Study of War said.

Russian forces continued to launch strikes on civilian infrastructure in Kharkiv, Ukraine’s second largest city in the northeast, and the surrounding region. Kharkiv governor Oleh Syniehubov said the strikes on the city resumed around dawn Tuesday, damaging a car dealership.

“We must be prepared for this war – which Russia is conducting with absolute brutality, and is conducting in a way that no one else would – to last months,” Baerbock said during a visit to Prague.