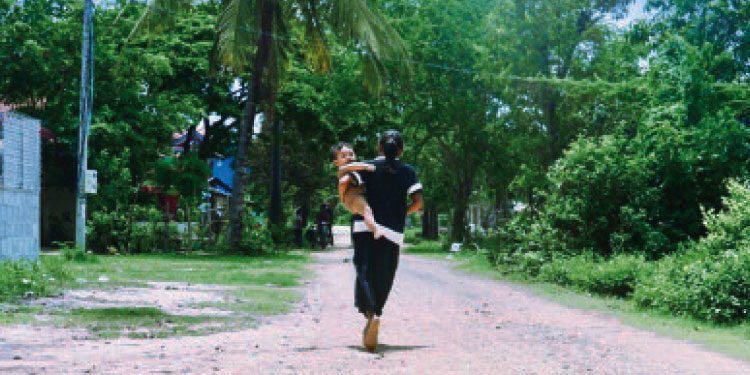 Rural Cambodians continue to face the brunt of the pandemic’s economic impact even as the capital enjoys a slow but steady rebound in commercial activity because of continued vaccination efforts.

Sampoar village in Kampong Speu province’s Basedth district is home to about 374 households living near the foothills of Dam Rei Romeal Mountain.

Most of the population rely on agriculture but also supplement their income by working in factories or on construction sites, according to Deputy Village Chief Kong Saray.

“It has been a very difficult situation here since the travel restrictions [were imposed]. People were able to move from one place to another but now they have no choice but to stay here,” Saray told Khmer Times via a translator. “This is the reason why they can’t earn anything.”

About 80 percent of the population in Sampoar has lost some income during the last two months and only about 12 families have received stimulus payments.

The government has spent about $335 million since last year in relief and stimulus packages through the Covid-19 Cash Transfer Programme (CCTP).

The National Social Protection Council claims that about 14 percent of the Kingdom’s population – 2.7 million people – have received benefits.

Prime Minister Hun Sen will decide on June 25 whether to continue, broaden or narrow the CCTP after the National Social Protection Council recommended last week that it continue.

Kong said that the funds have been distributed only to the extremely needy, such as the differently-abled or elderly with no one to take care of them.

“The government has said that these people will get vaccinated first,” he added.

However, with about 20 percent of the people living in the village taking care of extended family members, the eagerness to return to work among them is palpable.

There is just one shop in Sampoar and it is located just steps from the village hall.

Its owner, 30, once worked three jobs – farming, shopkeeping and construction.

The father of two said that most people in the village also worked additional jobs.

Women worked in the garment industry while the men laboured in the construction industry, he said.

As a result, household income before the pandemic was about $500 per month when both husband and wife worked outside their farms, he estimated – less than half of Phnom Penh’s income per capita.

A nearby quarry at the mountain has led to a construction boom. However, some projects have stalled while others are continuing with a smaller workforce.

The shopkeeper’s 6-year-old son loaded and unloaded pebbles onto a tri-colour plastic lorry, emulating the ubiquitous sight of vehicles coming and going from Dam Rei Romeal as his father explained that his storefront has seen a drop in business over the last two months.

People are eating the things they grow, he said. On average, household income has halved since April, he estimated.

“They said that no one is allowed to go back to work until we get vaccinated but the focus is taking care of Phnom Penh right now,” he said.

Like most, the shopkeeper has a microfinance loan and is continuing to pay it off. Declining to name the amount he owes or what he pays per month, he said that the repayment scheme had remained untouched despite the pandemic.

As a result, his family had to sell valuable livestock including cows to keep up with loan repayments.

Sampoar has a microclimate which means that it rains there less than in nearby areas.

A young farmer whose name has been withheld to protect his privacy said that he spends between $7 and $8 per month on water to make up for the lost rainfall.

“The rain is not coming and my watermelons are small,” he said, as he motioned towards his cart.

A glimpse inside it revealed that his fruit more closely resembled the size of large grapefruits rather than watermelons.

The father of two also takes care of an elderly parent who is both blind and deaf. He said that his family did not receive any CCTP funds because his wife has managed to hold onto her job at a nearby factory.

His household earning is about $200 a month working six days a week with only his wife working outside the village, he said.

“People in the village want to go back to work but we have to wait for the vaccine. No one has gone to Phnom Penh for it. We don’t know when we will get it here,” Kong said standing in front of the cart.

When asked, the deputy village chief said he could advise the federal government on whether or not the CCTP should continue.

“My bosses know more about the issue than me and I trust them to make the right decision,” he said.

Venezuela’s Dancing Devils ask for an end to the pandemic