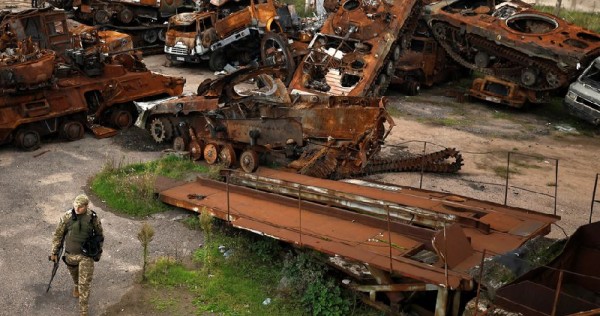 KYIV, – President Volodymyr Zelenskiy said Ukrainian forces have retaken more settlements in Kherson, one of the partially Russian-occupied southern regions that Moscow claims to have annexed.

With Russian forces retreating from front lines in the south and east, Zelenskiy said in a late-night video address on Wednesday (Oct 5) that Novovoskresenske, Novohryhorivka and Petropavlivka to the northeast of Kherson city had been “liberated”.

At the United Nations, Russia is lobbying for a secret ballot instead of a public vote next week when the 193-member UN General Assembly considers whether to condemn its annexation of Donetsk and Luhansk in the east and Kherson and Zaporizhzhia in the south after staging referendums in the provinces.

Russian President Vladimir Putin signed a law on Wednesday to incorporate the four regions into Russia. Ukraine says it will never accept an illegal seizure of its territory by force. Kyiv and the West said the referendums were rigged votes held at gunpoint.

The new law would incorporate about 18 per cent of Ukraine’s territory into Russia, equivalent to the area of Portugal, in Europe’s biggest annexation since World War Two. Putin says he wants to ensure Russia’s security and protect Russian-speakers in Ukraine. Kyiv accuses Moscow of a land grab for territory.

Russia’s move to annex the regions raises the possibility of escalation in the war. Putin and other officials have said they could use nuclear weapons to protect Russian territory including the annexed provinces.

Ukraine has said it will not be swayed by any nuclear threats and Zelenskiy said in his address he and his senior military officials met to discuss recovering all lands occupied by Russia.

Switching to Russian, Zelenskiy addressed pro-Moscow forces, telling them they had already lost.

“Ukrainians know what they are fighting for. And more and more citizens of Russia are realizing that they must die simply because one person does not want to end the war,” he said in a reference to Putin.

Moscow’s map of Ukraine appears to show shrinking areas it controls. A map of “new regions” published by state news agency RIA included the full territory of the Ukrainian provinces, but some parts were shaded and labelled as being under Ukrainian military control.

Reuters could not immediately verify the report.

Ukrainian forces have recaptured thousands of square miles of territory since the beginning of September, including dozens of settlements in the past few days.

Thousands of Russian troops retreated after the front line crumbled, first in the northeast, and, since the beginning of this week, also in the south.

Putin celebrated the annexations in a ceremony in the Kremlin followed by a concert on Red Square last week, only hours before Ukrainian forces captured Lyman, Russia’s main bastion in the northern part of Donetsk.

On Wednesday, the bodies of two Russian soldiers were still lying bloating in trees on opposite sides of the road near Lyman, close to the blasted hulks of cars and a van.

Occasional crumps echoed from distant fighting between retreating Russians and Ukrainian troops advancing toward a north-south highway that serves as one of the last supply routes for Russian forces in Luhansk province.

In Lyman, Nina, 73, stood waiting for an aid delivery by a municipal building. There were 15 bodies of Russian soldiers lying in her street, she said.

“Nobody removes them. It’s the fifth day they are lying there. And we have the smell,” she said.

In one of his first moves to assert his rule over the four annexed provinces, Putin ordered the Russian state to seize control of the Zaporizhzhia power station, Europe’s biggest, still run by Ukrainian engineers despite being captured early in the war by Russian forces.

The UN nuclear watchdog, the IAEA, said it had learned of plans to restart one reactor at the plant, where all six reactors have been shut down for weeks.

The power station is right on the front line, on a Russian-controlled bank of a reservoir with Ukrainian forces on the opposite bank, and both sides have warned of the danger of a nuclear disaster.

In recent days, Russia detained the plant’s Ukrainian manager. He was released but will not return to work. The head of Ukraine’s state nuclear energy company Energoatom, Petro Kotin, said he was taking charge of the plant and urged workers not to sign any documents with its Russian occupiers.

Kyiv has long accused Moscow of planning to switch the plant from Ukraine’s power grid to Russia’s, which it says would increase the risk of an accident.

IAEA head Rafael Grossi, who is due to visit Kyiv and Moscow this week, said negotiations on a safe zone around the plant were more important than ever.

Putin, in televised comments, said he had signed a decree making “corrections” to the partial mobilisation he announced on Sept 21. The decree would defer conscription for additional categories of students. Hundreds of thousands of men have left Russia since the invasion began on Feb 24, some fearing they would be called up, others objecting to the war.