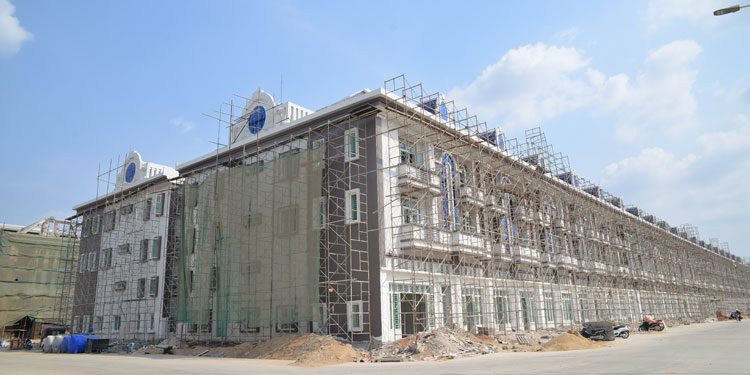 Landed property (Borey) projects are still in strong demand during the COVID-19 pandemic but real estate industry insiders say one must be careful with an oversupply situation while mortgage applications to banks have reportedly dropped significantly during the first half of the year.

The number of new launches of landed property (Borey) in the third quarter of the year was 18 projects within five districts in the Capital, namely Khan Sen Sok, Khan Russey Keo, Khan Mean Chey, Khan Chbar Ampov, Khan Dangkao, and Khan Posenchey, according to a CBRE report.

The report also stated that though Cambodia is hit by the pandemic,  prices of landed property remains promising.

Prime Minister Hun Sen yesterday also mentioned that during the pandemic, construction is still ongoing, especially in the landed property (Borey) segment and the demand for houses is still there, and it creates thousands of jobs for  Cambodians.

Grace Rachny, executive director of Century 21 Cambodia, told Khmer Times that the average price and demand of  landed property (Borey) is still good; while, the developers are targeting the local buyers.

She said developers are developing and launching their Borey projects phase by phase. Therefore, there is no real issue on an oversupply.

“The secondary market for Borey is still good as buyers can buy more since they are at an affordable price compared with last year as well as since there is good payments terms” she added.

Rachny however said if the price of the landed property is around $200,000 to $300,000 per unit, there will be issues as the buyers are depending on their monthly salary, so they can be affected during the Pandemic if there are job losses, but the mid range landed property still fetches good values because the buyers are purchasing the house for living and not as an investment.

From 2015 to 2030, the demand for new homes is estimated to be 1.5 million. The demand in Phnom Penh alone could amount to some 800,000 more houses. Based on this figure, Cambodia would need to build 50,000 units per year to meet the demand because of rapid urbanisation.

By the end of 2019, Cambodia supplied more than  38,488 new general houses and 8,331  affordable homes across the country, according to a report from Ministry of Land Management, Urban Planning and Construction.

In the first half of 2020 across the country, mortgage applications fell by 51 percent, according to the Credit Bureau of Cambodia (CBC). CBC is the leading provider of credit information, analytical solutions and credit reporting services to banks, microfinance institutions, lending companies, credit operators, and consumers in Cambodia. CBC added that consumer loan balance by type as of June 2020, was $8.73 billion. Of these, loan balance accounted for  50.47 percent on mortgages, 48.96 percent on personal finance and 0.57 percent on credit cards.

James Hodge, a senior director at CBRE Cambodia, told Khmer Times that there is always a lag between buyers demand and developers expectations, so developers tend to increase their prices when they launch their project compared to the competition because they often want to provide something unique or different.

He said that if their project has been active for six months and they had a very good sales period in the first three months and then it slowed down it doesn’t matter as it pushes the price up.

Hodge added that with regards  to mortgage rates, it doesn’t always fully indicate exactly what is happening in the market, what the government called the grey banking sector (unregulated banking sector) where the developers are providing the finance.

This is now coming under government regulation which is a really good thing so that the government got the oversight of what those developers are doing. It may just mean that the number of people moving away from bank mortgages across the market including landed property is increasing.

“So when we are talking about landed property is comes down to completion more than an oversupply so what you will see is developers working harder to get customers in. That said, an oversupply can occur in the secondary market when a buyer is trying to resell their landed property,” said Hodge.

According to the CBRE report, the roadmap to recovery on the landed property is for the developers to do more daring promotions, speeding up on construction activity to meet the handover requirement, focusing on the affordability of the projects, and focus on the low-to-mid-rise development to be introduced in  future Borey projects.