Prime Minister Hun Sen seeks more investment from the US 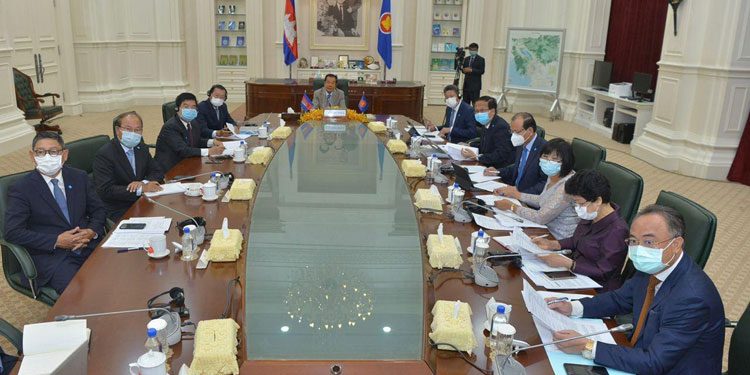 Prime Minister Hun Sen yesterday said that although the COVID-19 pandemic has caused a severe impact on many Cambodians’ livelihoods and the economy, the government will not slow down its reform and development in any sector.

He made the remark during a meeting via video conference with Alexander Feldman, chairman, president  and chief executive officer of the US-Asean Business Council.

Mr Hun Sen thanked the council and US companies for their efforts in contributing to the development of Cambodia and boosting the living standards of Cambodian people as a whole.

“I would like to call on the representative of US companies to continue to promote achievements that the government has made to support business and investments and also helping to attract US businesspeople to invest in Cambodia,” he added.

He added that Cambodia will sign a free-trade deal with China soon. “I hope that the law [investment law] and the Cambodia-China free-trade agreement will play a role in bolstering Cambodia to become a hot spot for US companies that are seeking a new production hub in  Southeast Asia,” Mr Hun Sen said.

The premier added the Cambodian government has also issued sharpened measures to solve problems faced by investors and businesspeople. This reform is to boost the competitiveness of the Kingdom and to provide more convenience and to create a favourable business environment in doing business and investing in Cambodia.

According to the US Statistics Bureau, from January to July bilateral trade between Cambodia and the US rose by 17 percent this year to $3.57 billion. Cambodia’s shipment to the world’s largest economy reached $3.4 billion, up 24 percent.

In July alone, Cambodia exported $649 million of products to the US while it imported goods worth $25 million from the country, stated the report. Cambodia’s major exported products were textiles, footwear, travel and agricultural products while its imports included vehicles, animal feed and machinery. Last year, the two-way trade between the two countries  amounted to $5.8 billion, a year-on-year increase of 37 percent.

During an event held between the US embassy and Cambodia’s Ministry of Commerce this month, US Ambassador to Cambodia Patrick Murphy said that US products represented the “gold standard” for international products, highlighting brands such as Ford and Jack Daniels that have proved popular in Cambodia.

He also noted that the US is assisting Cambodian exports through its Generalised System of Preferences, which includes travel goods (including handbags, backpacks and luggage) and milled-rice.