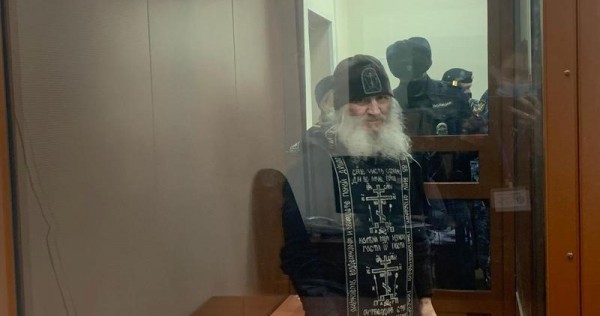 MOSCOW – Police raided a convent near Russia’s Ural Mountains in the early hours of Tuesday and arrested a renegade priest who had seized control of it and allegedly encouraged nuns to commit suicide.

Father Sergiy was taken to Moscow, some 1400 km (870 miles) from the convent, where a court ordered him remanded in custody for two months.

Footage posted online showed a melee of riot police and people shouting outside the convent during the raid.

“They chased us out, chased out all the children, they didn’t let us take warm clothes,” one unnamed nun was quoted as saying by the local E1 media outlet. “They put the priest face down on the floor and beat him with truncheons.”

Father Sergiy, whose real name is Nikolai Romanov, gained prominence after denying the existence of the coronavirus, railing against church closures due to the lockdown, and criticising the Russian Orthodox Church.

He seized control of the Sredneuralsky convent in Yekaterinburg in the Urals in June and refused to leave.

Fond of wearing long dark robes, he was formally cast out of the church in September for ignoring a ban on him holding services and preaching, but had some loyal followers.

As police brought him to Moscow, some gathered outside the court holding up religious icons and chanting: “Father Sergiy, we’re with you!”

He is set to remain in custody until Feb. 28 pending trial on charges of driving people to suicide, violating the right to freedom of conscience and fomenting unlawful actions.

The Investigative Committee, which handles probes into major crimes, accused him of calling on at least 10 nuns to commit suicide and sharing a video of the sermon online.

He had previously been sentenced to 13 years in jail for murder and robbery but was released in the 1990s, the Committee said in a statement.

Russian Orthodox Church spokesman Vladimir Legoida wrote on Telegram: “It’s a pity that…Sergiy and his supporters did not heed the repeated calls of the church to repent and amend (their ways).”