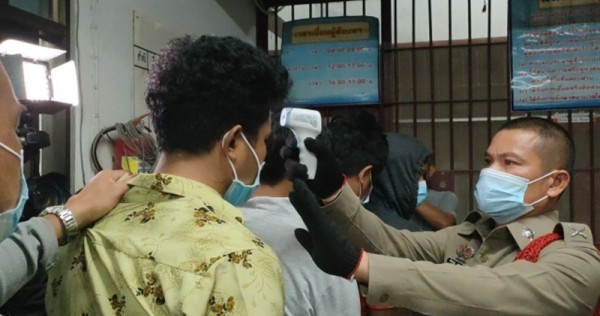 Four men who savagely beat up a hip-hop dancer at a restaurant in Buri Ram’s Lahan Sai district told police they were angry the victim made a “mocking” gesture when they were celebrating a birthday party.

Nopparat Boonrat, 23, who came in second at a hip-hop doubles competition in Poland in 2018, had his skull cracked in the attack on December 23.

Lahan Sai Police summoned the four, warning they would be arrested if they did not turn up to answer questions.

Brothers Worraphol and Vikrom together with Sonthaya had escaped to Chon Buri province after the assault.

However, their families reportedly pressured them to go to the police station.

They confessed to police that they went to the restaurant to celebrate Vikrom’s birthday, but when they brought out a cake, Nopparat was seen “crossing his arms”.

The gang interpreted this as a mocking gesture and quickly set upon attacking Nopparat.

The police detained them at the station but had to screen them for Covid-19 as Chon Buri is a high-risk province.

The four were charged with severely assaulting another person.