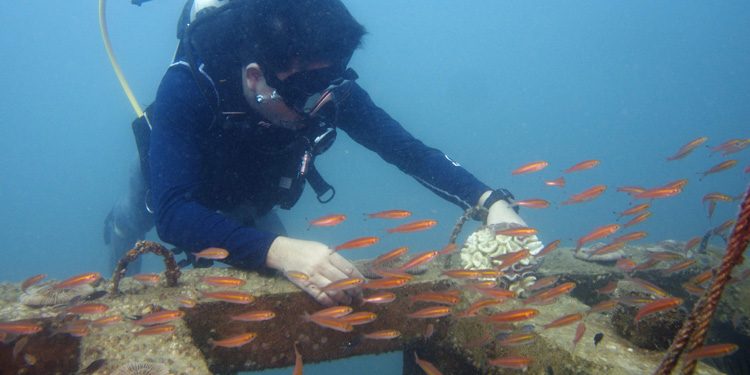 Although Cambodia is not known to many divers around the world, it has some of the most untouched marine life to be found and makes it a perfect destination for the sport.

The nation has a long coast with many white beaches and clear waters as well as numerous islands that compare favourably with many diving hotspots and well-known sites off the gulf of Thailand. This leaves plenty of opportunities for diving businesses.

Now a businessman has opened a diving school based in the unlikely venue of Phnom Penh.

Khmer Dive Group works between the Capital Phnom Penh and the breathtaking islands off Sihanoukville.

The owner of the group is Pier Reak Kann, who was one of the first three dive instructors in Cambodia and is a director of Khmer Dive Supply Co Ltd.

He said the reason for launching in the capital is that it has a large client base in the city and also it’s easier to teach new divers in the swimming pools with state of the art equipment, before heading down to the islands mostly prepared and ready to earn a qualification.

His preferred teaching method is by the Professional Association of Diving Instructors (PADI). The group is fully registered and qualified and offers one-day “Discover scuba diving” courses at $95 and the full open water diving licence four-day course at $450.

Reak Kann  set the diving group up to introduce and educate other Cambodians about the sustainability of the oceans. Since setting it up, he with the help of fiends, have built more than 50 artificial reefs around Koh Tang and neighbouring islands.

An artificial reef is a manmade underwater structure, typically built to promote marine life. These artificial reefs are constructed from concrete blocks to act as a barrier for small fishing vessels laying down large nets, protecting the reefs and allowing them to flourish.

The artificial reefs were crowd-funded by keen Khmer divers and local resorts who wanted to support the island tourism industry and were keen to protect the amazing reefs that were being overfished.

The plastic and pollution problem, as well as being a global problem, is a social issue here in Cambodia. Mismanaged waste, including plastic, can harm human health, especially in remote island communities such as Koh Rong. Besides the health risks from eating seafood contaminated by marine plastic pollution, mismanaged plastic waste on land can clog sewers and drains, leading to flooding and the spread of water- and mosquito-borne diseases.

It is widely known that marine plastic pollution harms ocean life. Sea turtles may mistakenly swallow plastics bags, which may bear a resemblance to their usual source of food, jellyfish. Plastic bags and nets can also smother or even kill coral, the foundation of marine ecosystems.

“The world’s ecosystem relies upon the ocean. We must protect it as much as we can. It starts with educating our local communities at all ages” said Reak Kann.

He is now also training and leading Cambodian Navy Seals and hopes to expand and employ more people.

Cambodia insurance income rising 21.4% in the first quarter of 2020