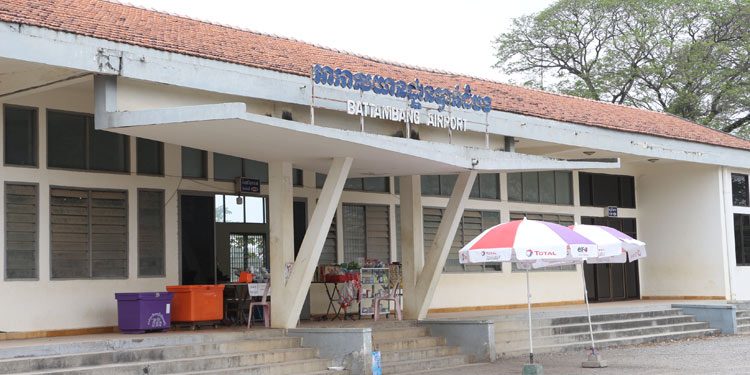 Battambang administration said a local firm has given the green light to conduct a feasibility study to rebuild the abandoned Battambang Airport, hoping it will boost the tourism flow to the province and other destinations nearby.

Speaking during a news conference yesterday, Battambang provincial governor Nguon Ratanak, said the project is now being studied by a local investment company.

Although he did not name the company, he previously held a meeting with Emmanuel Dias, general manager of Airaviata (AAT) Cambodia Regional. They discussed a domestic aviation investment plan and potential routes for small aircraft.

The move came following a call made by Prime Minister Hun Sen giving his speech at the 6th River Festival in the province in March. He wanted the airport to be renovated because the province boasts great tourism potential.

However, Ratanak did not disclose as to when the studies will be completed nor how much the project would cost.

“The airport was initially launched in 1968 when it was only able to serve small-scale domestic flights. But now times are different. We conducted the studies with the aim of responding to market trends,” said Ratanak.

He added that the provincial administration and civil aviation have jointly created a team to conduct the impact on the surrounding area. This concern had also been raised by Premier Hun Sen, who asked the local authorities to inform residents not to build any high-rise buildings near the abandoned airport that, he said, may affect future development plans for the hub.

Battambang Airport took a downward turn in 1975 when the Khmer Rouge came to power. The small airfield was reopened and used for civilian aircraft until the end of the 1990s, but it never returned to full operational status.

The airport is three kilometres from the city centre in Battambang. It has a total land area of 128.68 hectares. The runway length is slightly more than 1,600 metres with a width of 34 metres.

Battambang province has lured tourists both from Cambodia and overseas with its unique attractive spots – from ancient temples and other buildings to ecotourism. With that potential, Ratanak said the re-opening of the airport is expected to have more tourists visiting the province.

“It is important because the airport will make it more convenient for travellers, especially those who wish to travel faster to Phnom Penh and other provinces. For example, if foreign or local tourists want to visit Battambang at night, then they can fly from Siem Reap and Sihanoukville airports,” he said.

“That said, it will be a potentially great boost for tourism flow in the province and will save timee because it is faster than bus transportation from one province to another,” he added.