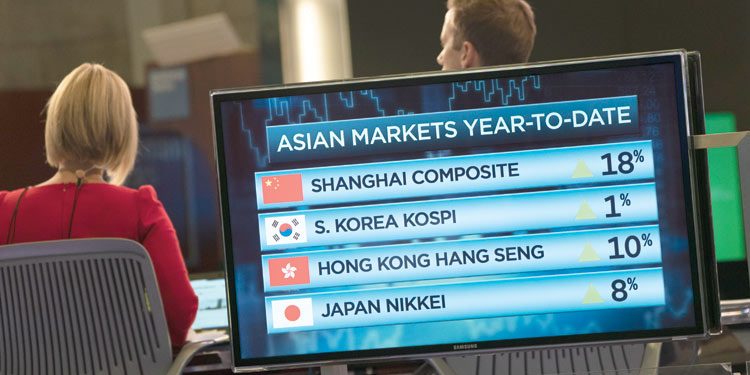 AFP – Asian markets were mixed yesterday but investors remain on edge after Donald Trump’s top virus adviser warned that easing lockdown measures too early could spark another dangerous wave of infections and batter the economic recovery.

Tensions between the US and China added another layer of concern for traders after lawmakers in Washington proposed giving the president powers to impose fresh sanctions if Beijing does not give a “full accounting” for the coronavirus outbreak. A second day of selling followed losses on Wall Street and eats into recent gains driven by slowing infection and death rates, and the lifting of economy-strangling measures that kept billions at home. The recent optimism that has flowed through markets – helped by trillions of dollars in worldwide stimulus and central bank backstopping – has been given a jolt by data showing fresh outbreaks in South Korea, China and Germany. US infectious disease expert Anthony Fauci added to the unease on Tuesday when he said in congressional testimony that reopening businesses and communities too early risked damaging recent progress in containing the disease. He told a Senate panel that federal authorities had developed guidelines on how to safely reopen activities, with a sustained 14-day decrease in cases as a vital first step.

“If a community or a state or region doesn’t go by those guidelines and reopens… the consequences could be really serious,” said Fauci.

“There is a real risk that you will trigger an outbreak that you may not be able to control,” he added, and warned it “could even set you back on the road to trying to get economic recovery”. Federal Reserve officials, however, warned about the long-term financial impact of an extended shutdown. St Louis Fed president James Bullard said in an extended period of strict measures “you will get business failures on a grand scale and you will be taking risks that you would go into depression”. His Minneapolis counterpart Neel Kashkari said the economy was likely only to see a “gradual, muted recovery”. Still, several Asian markets bounced back from early losses to trade up later in the day. Hong Kong and Shanghai each rose 0.2 percent, Sydney rose 0.4 percent and Seoul rallied one percent, with Taipei up 0.5 percent.

Mumbai surged more than two percent a day after Prime Minister Narendra Modi unveiled a package worth $266 billion, or about 10 percent of India’s GDP, to stimulate the economy. Tokyo ended down 0.5 percent, while there were also losses in Wellington, Kuala Lumpur, Singapore, Manila and Jakarta, with Bangkok flat. In early trade, London fell 0.9 after official figures showed Britain’s economy shrank two percent in the first quarter. The Bank of England has already warned of the worst recession in centuries. Paris and Frankfurt were both down more than 1 percent.

“Markets’ positive take on the recovery, after unprecedented fiscal and monetary stimulus, will be put to the test,” Alexander Kraemer, head of cross-asset strategy at Commerzbank AG, wrote in a note.

“Market participants await confirmation that the economy will indeed start to return to normalcy” in the second half of the year.

Analysts pointed to friction between the world’s top two economic superpowers that has fanned fears of a renewed trade war.

While negotiators last week confirmed they would push on with implementing a trade deal signed in January, Trump this week called on his officials to block investments in Chinese stocks by a government retirement fund.

The senate plan to give the president fresh sanction power added to the jitters.

The legislation will give Trump 60 days to certify to Congress that China has provided a full account of the COVID-19 outbreak to a probe that could be led by the United States and its allies, or a United Nations body such as the World Health Organization.

Cambodia white rice is allowed to export to international market