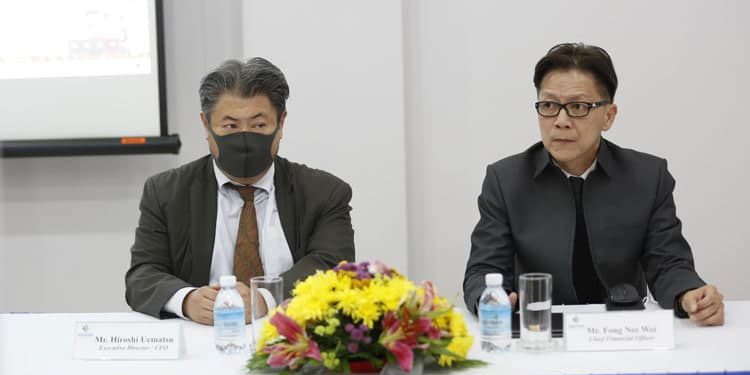 PPSP Chief Financial Officer Fong Nee Wai said, in his opinion, the company share price (trading yesterday at 1,490 riels a share) is currently way undervalued and believes there are buyers/investors in the market who will see potential value and be prepared to invest and buy shares from seller(s).

“There appear to be shareholder(s) willing to part with their shares at way below what is in our opinion, the fair value of PPSP. Having said that, there are also ready buyers in the market who do see value in the PPSP shares and they are prepared to wait and buy shares from [those] seller(s).

Because of the price pressure exerted by the seller(s) [who] maybe [have had] a change in their own rationale and reasons for holding PPSP shares, the share price for the past month has been drifting lower [which is] certainly beyond the company’s control.

However, this is not specifically reflected only in PPSP. Most of the shares listed on the CSX are also lower, as reflected in the declining CSX index over the past months,” Fong said.

PPSP had a meeting with the exchange’s regulator, the Securities and Exchange Commission of Cambodia (SECC) yesterday to discuss the share buyback plan that received shareholder approval in October.

“We intend to keep the share buyback plan as planned, but this will be subject to its final approval by the regulators after they understand our plan. The timing may alter slightly but it will still be within this month [December],” Fong said.

Last month it was announced that PPSP was in arbitration with Asiatic Group (Holdings) Ltd (AGHL), a Singapore Exchange-listed company seeking a minimum of $14.4 million in relief over a disputed power supply contract – allegations PPSP fully denies.

Their share price, however, has fallen 34 percent from $0.56 in October (when the share buyback plan was announced) to yesterday, representing a 50 percent drop from its 2016 initial public offering of $0.73.

According to the company’s third-quarter report for the first nine months of 2020, PPSP made $537,246, down 93 percent compared with $8,615,848 over the same period last year. The company’s revenue and profit is largely attributed to land sales within the zone.

According to PPSP Chairman Tan Kak Khun: “The financial position of the company remains strong” with total assets amounting to $95,142,366 and total equity amounting to $59,944,787, representing a debt-to-equity ratio at 0.59.

This article was first published in Khmer Times. All contents and images are copyright to their respective owners and sources.
Tags: CambodiaPhnom PenhPhnom Penh Special Economic Zone
Previous Post