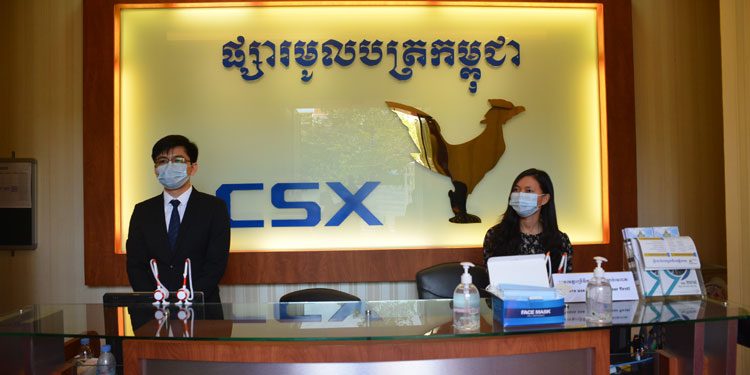 0
SHARES
19
VIEWS
Share on FacebookShare on Twitter
The Cambodia Securities Exchange (CSX) has received its first-ever initial public offering (IPO) application for its Growth Board, which was launched in 2015.

The IPO underwriter, SBI Royal Securities, said the Listing Eligibility Review Application and Disclosure Document have been submitted to the CSX and the Securities Exchange of Commission of Cambodia (SECC) and are awaiting approval.

They added that detailed information about the company, including its name, will be released following the regulators’ approval. It was disclosed that the applicant’s annual revenue of $9 to $10 million and profit of more than $1 million, had been awarded under the Excellence Programme of the SECC.

CSX Chief Operations Officer Ha Jong Weon said yesterday, “The regulators are reviewing the application and will give approval notification within one month if the documents and information are [deemed] complete.”

“[This] first company listing on the growth board, will act as a catalyst to leading SME(s) qualified to issue stocks to the public,” he added.

The CSX Growth Board was introduced in 2015, as an addition to the CSX main board. It was designed to raise capital for small and medium enterprises (SMEs) following complaints about difficulty in sourcing investment and working capital options.

It has remained unlisted since its launch. SMEs have explained their reluctance to list as concerns about auditing and the amount of regulation requirements, despite the government having announced favourable tax advantages.

Potential listings also require either a positive net income for the latest year, or positive operating cash flow or a gross profit margin of 10 percent or more.

This article was first published in Khmer Times. All contents and images are copyright to their respective owners and sources.
Tags: CambodiaCambodia Securities ExchangeCSX
Previous Post