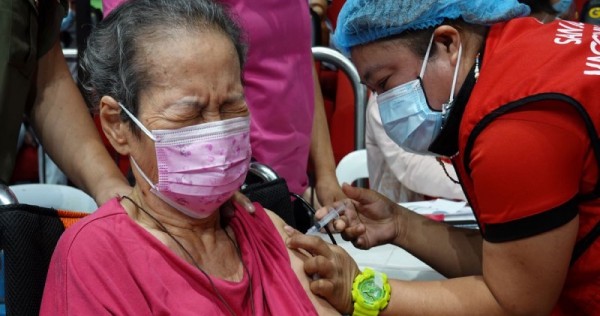 MANILA — The Philippines launched on Monday (Nov 29) an ambitious drive to vaccinate nine million people against Covid-19 in three days, deploying security forces and thousands of volunteers in a programme made urgent by the threats of the Omicron variant.

Though the earlier target of 15 million shots was scaled back, nine million would still be a significant number in a archipelago nation where logistics and vaccine hesitancy are hurdles.

“This is our single biggest push to fast-track vaccination,” Philippines President Rodrigo Duterte said at a vaccination centre east of the capital Manila.

In several of the 8,000 vaccine sites, where 160,000 volunteers were working, police were helping hundreds of people in queues, while parents brought children to be inoculated.

“This is important to avoid Covid-19 and for us when we do face-to-face classes in the future,” said Sean Gerald Valdez, aged 12, after getting inoculated.

Three million daily vaccinations would be nearly quadruple the national average of 829,000 during November.

Carlito Galvez, the country’s vaccination chief, said the new Omicron variant had made the campaign even more important.

“It is better to be prepared for the effects of Omicron,” he told CNN Philippines.

Omicron, which the World Health Organization has described as a “variant of concern”, has yet to be detected in the Philippines. Its spread has sparked global travel restrictions and rattled financial markets .

The Philippines has been dealing with one of Asia’s worst Covid-19 outbreaks and its vaccine rollout has been slower than many neighbours, with just over a third of its 110 million population inoculated.

Average new daily infections have fallen sharply to 1,644 in November from 18,579 in September, paving the way for a wider economic reopening.

Vaccination rates are uneven, however, with 93 per cent of the capital region’s eligible residents inoculated compared with 11 per cent in the poorest parts of the south.