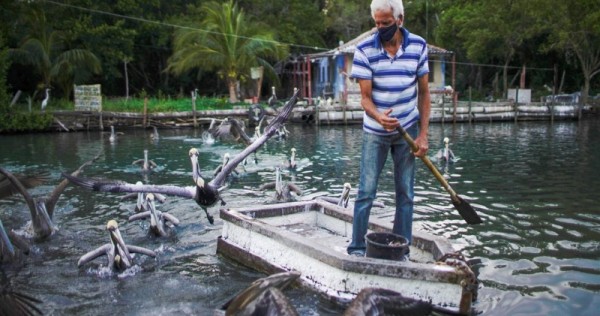 “Michel the noble” and “Panchito the affectionate” are some of the names Leonardo Carrillo has given the pelicans that flock each year to his wooden hut on the southern coast of Cuba.

For the past two decades, the 62-year-old has cared for the colony of around 100 brown pelicans that land in his village of Guanimar in December to spend the winter months there before heading back north in May.

“I feel very lonely when the pelicans leave,” he said. “They are basically like my children and I miss them every day.”

Carrillo said he does actually have three (human) children – two who live in the Isle of Youth and one who lives in a nearby town. But he has not been able to see them much lately due to the pandemic.

Brown pelicans – one of two species found in Cuba – are typically gray-brown birds with long bills and a stretchy throat pouch used for capturing fish.

“They may all look the same but in reality each one has different characteristics,” he said.

While the pelicans can feed themselves, Carrillo says he also gathers leftovers from the village for them and treats them for injuries caused by fishing hooks.

“I like to look after them because they are noble and affectionate birds,” he said, showing how they took food straight from his hand as he stood in a small boat, before hopping up into the nearby mangroves or onto the muddy coast.

Carrillo used to work in a state fishing company but ever since it closed eight years ago, he has subsisted off odd jobs like selling ice and remittances from cousins in the United States.

The pelicans though keep him busy for half the year as he tries to feed them three to four times a day – no easy task in a country going through its deepest economic crisis in decades and suffering widespread shortages of basic goods.

“As long as I live, I will keep looking after them,” he vowed.