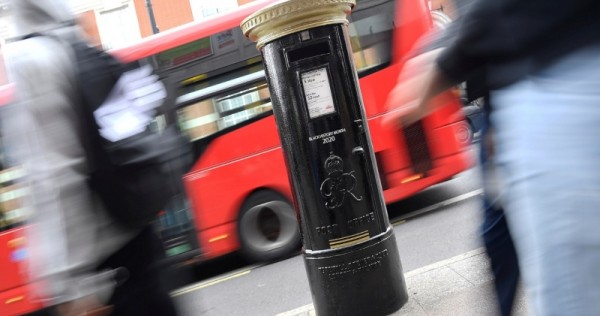 Four of Britain’s distinctive red postboxes have been painted black and gold and adorned with images by or of illustrious Black Britons, in a novel way of celebrating Black History Month.

One of Britain’s most recognizable symbols, red pillar boxes appear on countless postcards and souvenir items, while tourists can often be seen posing for photographs next to the postboxes.

The Royal Mail said it had selected one postbox in each of the four constituent parts of the United Kingdom – England, Scotland, Wales and Northern Ireland – and had them painted black with a gold trim at the top. They will remain that way for the whole of October, which is Black History Month.

In England, the chosen postbox is located close to the Black Cultural Archives heritage center in Brixton, an area of south London that has long been a hub for the Caribbean community and other Black minority groups.

The Brixton postbox features an image of the painting “Queuing at the RA” by British-Nigerian artist Yinka Shonibare, which appeared on a limited edition stamp issued by the Royal Mail in 2018 to celebrate the Royal Academy art gallery.

Shonibare is known for works that grapple with cultural identity and the legacies of colonialism, such as “Nelson’s Ship in a Bottle”, a replica of the ship HMS Victory enclosed in a giant bottle and with 37 sails made from an African fabric.

According to the UK Art Fund which acquired the artwork for display in London, it “considers the legacy of British colonialism and its expansion in trade and Empire, made possible through the freedom of the seas and new trade routes that Nelson’s victory provided.”

The Scottish black postbox, located in Glasgow, features an image of Walter Tull, who was the first Black player signed by the city’s Rangers soccer team before being killed in action during the First World War.

In the Welsh capital Cardiff, the black postbox features an image of Jamaican-born nurse Mary Seacole, who cared for wounded soldiers during the 1853-1856 Crimean War.

In the Northern Ireland capital Belfast, the selected postbox features a picture of comedian Lenny Henry, who the Royal Mail said was “instrumental in helping a multi-cultural society to embrace multi-cultural comedy”.

The Royal Mail is the latest institution to have engaged with Britain’s Black heritage in recent months, jolted by the Black Lives Matter movement and by the toppling of the statue of a slave trader by protesters in the city of Bristol in June.

Among other changes, another slave trader statue was removed by officials in London, a concert hall in Bristol renamed itself and a charity that runs hundreds of grand country estates published an in-depth report about how the properties benefitted from slavery and colonialism.

The trend has been met with a backlash, with parts of the media and some politicians dismissing it as “wokery”. The government has warned a number of major cultural institutions including the British Museum that their public funding could be called into question should they remove statues or other contentious objects.

Huge drop in income from Angkor Archaeological Park in Cambodia