Paddy seedlings given to flood-hit farmers in Cambodia 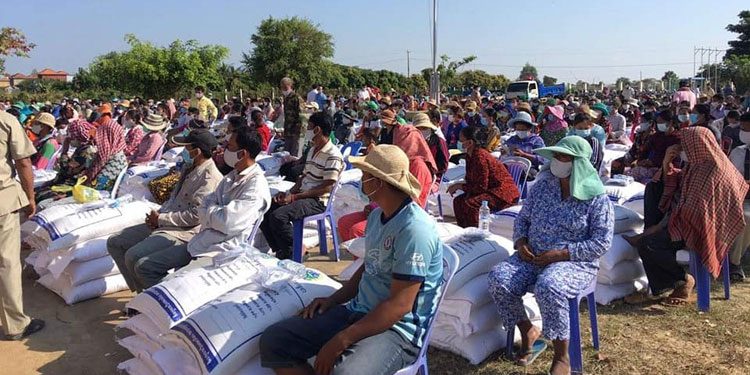 More than 6,000 tonnes of paddy seedlings have been distributed to flood-hit farmers across the country, according to Agriculture Minister Veng Sakhon, who said it was to help them to begin replanting rice in areas damaged by floods.

“Previously, the plan to deliver the paddy seedlings to the farmers was small – around 2,000 tonnes. However, since this was a natural disaster – severe floods – the demand for paddy seedling was high. up to 6,000 tonnes,” said Sakhon.

Sakhon said half of the seedlings were OM5451 varieties.

Vietnamese OM5451 rice is a long-grain variety of fragrant rice created by a crossbreed combination between the Jasmine 85 and OM2490 varietals, according to GIA International Corp, one of the top Vietnamese processors and exporters of rice and grains. It is primarily grown in the Mekong Delta provinces, gives a full yield and meets export standards. The grain of this variety is long, slender and a little chalky and has a slightly milky colour.

When asked whether there was any concern regarding exports when the farmers grow more OM5451, Sakhon said: “I think there is no issue on the paddy seedling [OM5451], but the most important thing is the market.”

He added some seedlings cannot be grown in a short period of time and consume less water. However, the OM5451 variety is mostly grown by farmers, especially those who live close to the border with Vietnam and have a good market.

“The farmers grow the OM5451 variety because market demand is high and they export it to Vietnam. Vietnamese traders will purchase this kind of variety paddy from farmers,” Sakhon added.

“We imported around 100 tonnes of OM5451 paddy seedlings from Vietnam because the demand of this seedling is high and the rest we collected from agriculture cooperatives in the country. While delivering paddy seedling to the farmers, we labelled which is which of the paddy varieties and which [farmers] received the OM5451 or Sen Kro Ob. We labelled the seedling variety and specification of the seedlings.”

Sakhon added OM5451 variety has a good market and is ready for harvest in only 85 to 86 days.

Ouk Makara, director of the Cambodian Agricultural Research and Development Institute (CARDI), said: “This kind of variety OM5451 needs more fertilisers and it can grow in every area if there is water because this seedling is not sensitive to the weather. So far, CARDI has also released another seedling called Sen Kro Ob to farmers. This takes one week longer than OM5451 to be ready for harvest.

“If OM5451 is produced by Vietnam, and released in Vietnam, and we bring it and grow it in Cambodia for commercial reasons, it could be a problem if farmers cannot sell the variety to Vietnam. But currently there are no issues,” Makara said.

According to the Ministry of Agriculture, Cambodia exported about 1.3 million paddies this year to Vietnam as of Nov 12 from different districts in the provinces that have a close border with Vietnam. The paddy mostly is OM5451, IR504 and Phka Romdoul varieties.