One in 20 people will need hospital care if they get Covid-19, study estimates 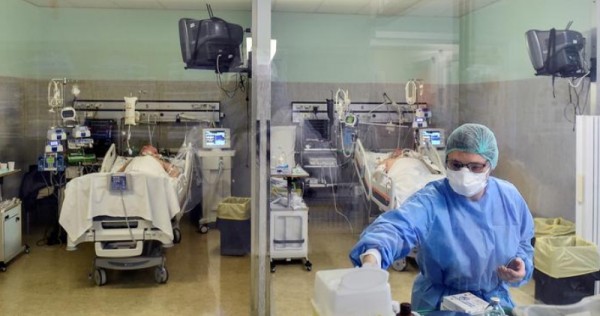 About one in 20 people worldwide – or 349 million – who are at high risk of severe illness from Covid-19 will need hospital treatment such as oxygen therapy if they contract the disease, according to a new study.

Researchers from Britain, the US and China, led by the London School of Hygiene and Tropical Medicine, made the estimate based on health data for 188 countries and UN population projections for 2020.

They concluded that “a large proportion of the additional health care burden” from Covid-19 was likely to come from people with underlying conditions. And without a vaccine, more efforts were needed to shield those at-risk people from contracting the disease, they said.

“Identifying at-risk populations is important not only for making projections of the probable health burden in countries, but also for the design of effective strategies that aim to reduce the risk of transmission to people in target groups,” the researchers wrote in a peer-reviewed paper published in The Lancet on June 15.

The researchers estimated that about 1.7 billion people – or 22 per cent of the world’s population – had at least one underlying medical condition that put them at increased risk of becoming seriously ill if they contracted Covid-19.

But for many of them, their conditions might not be diagnosed or recorded in the local health system, and the risk could be more modest.

The World Health Organisation has said that older people and those with pre-existing conditions are more vulnerable to severe cases of Covid-19, the disease caused by the new coronavirus.

Those conditions include cardiovascular disease, diabetes, chronic kidney and respiratory disease and other chronic conditions, according to the study.

It found places with older populations, African countries with high HIV/Aids prevalence and small island nations where diabetes was common had the highest share of people at increased risk.

However, the European Aids Clinical Society in April said there was no evidence of a higher Covid-19 infection rate or different disease course among people with HIV.

In Africa, 3.1 per cent of the population was estimated to be at high risk for Covid-19 – lower than the 6.5 per cent for Europe, because of the much younger populations in African nations, according to the study.

But the researchers noted that severe cases were more likely to be fatal in Africa than in Europe, and disruption to health systems in Africa could potentially lead to more deaths from diseases other than Covid-19.

More than 9.5 million people have been infected by the coronavirus worldwide, with nearly 490,000 deaths, and spikes in cases have put hospital systems under strain in some of the worst-hit countries like the US.

The study suggested more intensive physical distancing measures – especially at times and places where health systems could be overwhelmed – were needed for those at higher risk.

Governments should also consider improving population-based screening for high-risk conditions and encouraging at-risk people to spend less or no time in the workplace or even relocate to dedicated safe zones to avoid potential exposure to the virus, the researchers said.

They made the estimates using prevalence data from the Global Burden of Disease Study 2017, a worldwide observational epidemiological study, and the United Nations population outlook. They assumed men were twice as likely as women to be at high risk and older people were deemed to be those aged over 50.