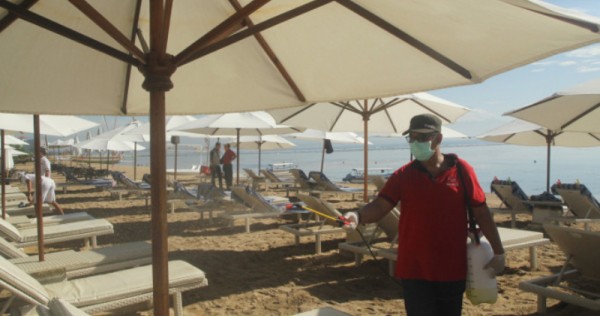 Local authorities have shut down a bar in Kuta in Badung regency, Bali, for hosting a party that failed to comply with Covid-19 health protocol.

Personnel of the Badung Public Order Agency (Satpol PP) and customary village authorities first dispersed the party, attended mostly by foreigners, on Thursday evening following reports from local residents that most of the attendees did not wear masks and that physical distancing measures were not imposed.

“We stopped [the party] at 8pm It cannot be like that. We must work based on regulations. There was no mask usage or physical distancing,” Kuta customary village chief Wayan Wasista said as reported by kompas.com on Friday.

Badung Satpol PP chief I Gusti Agung Kerta Suryanegara said his office summoned representatives of the bar’s management for information. The bar, he said, had been asked to close operations starting Friday.

“If they insist on staying open, we will report them to the Kuta Police,” he said.

Following plans to gradually reopen the economy in Indonesia, many resorts and entertainment spots in Bali have enforced social distancing measures and other health protocols to prevent Covid-19 transmission.

However, some businesses have yet to comply with the necessary measures. A similar incident occurred at a restaurant in Canggu, Badung, on Wednesday evening.

Authorities dispersed the crowd there after it was reported that most customers were not wearing masks.

A recent yoga gathering in Ubud also caught the public’s attention after it was found that large crowds there had failed to adhere to Covid-19 health protocol.

Bali has recorded 1,263 confirmed cases of Covid-19 with 11 deaths and 730 recoveries, according to national Covid-19 task force data released Friday.

Two out of the nine cities and regencies of Bali – Denpasar and Karangasem – are considered high-risk zones by the central government, while six areas, including Badung, are medium-risk zones.

To beat the heat, Vietnam rice farmers resort to planting at night

One in 20 people will need hospital care if they get Covid-19, study estimates