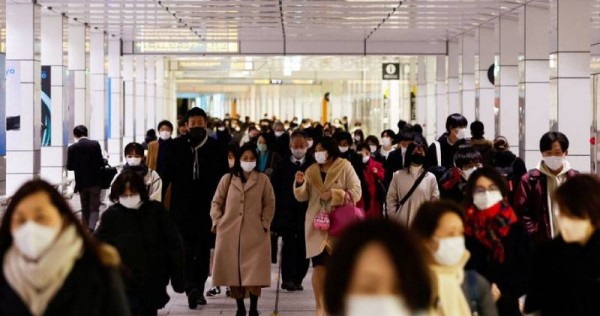 TOKYO – A Japanese government delay in rolling out Covid-19 booster shots left it more vulnerable than other rich countries when the Omicron variant brought a surge of deaths, say experts, local governments and a former vaccine czar.

The issue could mean political trouble for Prime Minister Fumio Kishida as nearly 30 per cent of the population is aged 65 or older, and so at greater risk from the coronavirus without the protection of the booster.

Kishida’s predecessor stepped down after widespread criticism of his handling of the pandemic and the prime minister’s ruling party faces an important test with an upper house election this year.

Although Japan was comparatively slow to launch its initial vaccination campaign, it ramped it up quickly and by November had the highest vaccination rate within the Group of Seven rich countries. read more

But then the health ministry stuck to a protocol for an eight-month wait between the first vaccination course and the booster, even as other countries cut the waiting times and local governments, including Tokyo, urged a faster roll-out.

The minimum wait was eventually shortened to six months – still longer than South Korea’s three months and Singapore’s five. Just 10 per cent of Japan’s population has had a third shot, compared with more than 50 per cent in South Korea and Singapore.

Hidekiyo Tachiya, mayor of Soma City in northern Japan and chairman of a national association of municipal leaders, met Kishida in October to press for an early start to boosters.

But none were given out until December, and then only to a trickle to doctors and healthcare workers.

“If they had told us in November, that six months was enough, then in Soma we could have gotten the shots out from December, and for that I feel resentment,” Tachiya, who is a physician, told Reuters.

Authorities in Tokyo also pushed for faster boosters but to no avail.

“We requested this next shot as soon as possible but the government didn’t quite agree,” Tokyo Governor Yuriko Koike told reporters recently.

A health ministry spokesperson said the eight-month lag between shots was decided by a health sciences council and the system was modified in December and January to respond to the Omicron threat.

The vaccine chief under the previous administration, Taro Kono, said the problem was a slow-moving civil service.

“The failure was the health ministry,” Kono, who remains a senior official in the ruling Liberal Democratic Party, told Reuters in an interview.

“I’ve been telling the Prime Minister’s Office, you have to be careful because the health ministry is not going to help you out,” he said.

“You really have to whip them to get things moving.”

Kono, who has been praised by the public and health experts for his role in the vaccination drive, said the intervention was key to getting things done quickly.

He recalled wooing Pfizer Inc executives to ensure faster vaccine deliveries, on one occasion, letting one feed the prime minister’s koi fish after a breakfast meeting at the premier’s residence, in the hope the gesture would help speed up supplies.

Adding to the booster delay, the Moderna Inc vaccine wasn’t approved as a booster until more than a month after the Pfizer shot was approved.

There weren’t enough supplies of both to distribute evenly and to ensure that people got the same booster as their vaccine, although authorities later recommended people get whichever booster was available.

Regulatory approval for the boosters was done according to the law, the ministry said.

“In a sense, the current situation in Japan is business as usual and the previous administration and minister were exceptional in a positive sense,” said Haruka Sakamoto, a physician and public health researcher at Keio University.

With signs the Omicron wave is peaking, the booster programme, which Kishida has pledged to spearhead, is finally gaining steam. The health ministry said this week it would buy and import another 10 million Pfizer doses by March.

While new infections are trending down, fatalities are a lagging indicator and still climbing. Nearly 2,000 people have died of the coronavirus in Japan in February.

The delay could become a problem for Kishida, said political commentator Atsuo Ito.

“We’re the farthest behind the advanced nations,” Ito said.

“Korea, right next door, is already starting their fourth shots.”