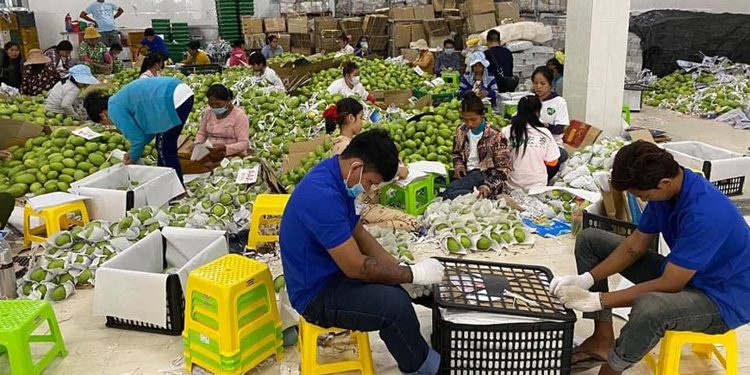 0
SHARES
24
VIEWS
Share on FacebookShare on Twitter
The official export of fresh mangoes to the Chinese market is slated for January or February next year as Cambodia waits for officers from the General Administration of Customs of the People’s Republic of China (GACC) to conduct their evaluation of local farms and production sites prior to the exports being greenlighted for delivery to China.  This comes nearly six months after Cambodia and China signed their June protocol on the phyto-sanitary requirements required to pave the way for the export of fresh Cambodia-grown mangoes to China.

Minister of Agriculture, Forestry and Fisheries Veng Sakhon said that while some companies sent pilot shipments of fresh mangos to China via Vietnam in early December, official exports will commence once the Kingdom fulfills the Chinese requirement that hot water treatment (HWT), or vapour heat treatment (VHT) machines be used to destroy pests on the fruit prior to shipping.

“Some local companies are waiting for their HWT or VHT equipment to be installed, in some cases because a number of the experts needed to assist with those installations are still in quarantine. Therefore, the process is slow and the pandemic has contributed to that slowdown,” noted Sakhon. “We are also waiting for officers from the General Administration of Customs of the People’s Republic of China (GACC) to conduct their evaluations on farms and production sites. Once our [Chinese counterparts have concluded their inspections], we are agreed we can [begin] exports [between] January and February in 2021,” he added.

As of Dec 14, the General Directorate of Agriculture at the Ministry of Agriculture, Forestry and Fisheries, had received 48 applications from mango farms and packaging sites wishing to register to export mangoes to China. The total amount of land under cultivation for mango production covered by the 48 applications is 28,345 hectares.

According to the GDA, Boeung Ket Planting & Industrial and Long Wo Agriculture (Cambodia), have begun installing HWT machinery with work scheduled for completion at the end of the month. Bamin Agriculture Hi-Tech Development Co Ltd is installing VHT machinery and also plans to have completed installation by the end of 2020.

Sakhon noted that VHT machines cost around $2 million, while HWT machines are around $500,000 per unit. This equipment will be used only six months a year during the harvest season and will lie dormant when there are no mangoes to process. This has some investors reluctant to invest in its installation.

Cambodia has a total of 124,319 hectares growing mangoes across the country with production and packaging sites comprising 91,398 hectares. Mango yields are, on average, 16 tonnes per hectare. Cambodia produces about 1.4 million tonnes of mangoes per season. Among the 18 varieties of mangoes in Cambodia, the Keo Romeat mango variety is the most popular one grown by Cambodian farmers.

This article was first published in Khmer Times. All contents and images are copyright to their respective owners and sources.
Tags: CambodiaCambodia MangoCambodia mango exports to China
Previous Post

Thai researcher wonders if chicken feathers on the menu might fly